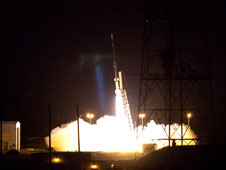 The Charged Aerosol Release Experiment (CARE) was conducted by the Naval Research Laboratory and the Department of Defense Space Test Program using a NASA four-stage Black Brant XII suborbital sounding rocket. Using ground based instruments and the STP/NRL STPSat-1 spacecraft, scientists will study an artificial noctilucent cloud formed by the exhaust particles of the rocket’s fourth stage at about 173 miles altitude.

The Spatial Heterodyne IMager for MEsospheric Radicals instrument on the STPSat-1 spacecraft will track the CARE dust cloud for days or even months. The SHIMMER instrument has previously viewed natural noctilucent clouds for the past two years. The CARE is the first space viewing of an artificial noctilucent cloud.

Data collected during the experiment will provide insight into the formation, evolution, and properties of noctilucent clouds, which are typically observed naturally at high latitudes. In addition to the understanding of noctilucent clouds, scientists will use the experiment to validate and develop simulation models that predict the distribution of dust particles from rocket motors in the upper atmosphere.

Natural noctilucent clouds, also known as polar mesospheric clouds, are found in the upper atmosphere as spectacular displays that are most easily seen just after sunset. The clouds are the highest clouds in Earth’s atmosphere, located in the mesosphere around 50 miles altitude.

They are normally too faint to be seen with the naked eye and are visible only when illuminated by sunlight from below the horizon while the Earth’s surface is in darkness.