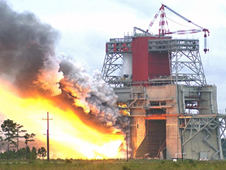 A test of the Saturn V first stage, S-1C-5, is conducted on Aug. 25, 1967 on the B-1/B-2 Test Stand at NASA's John C. Stennis Space Center. The test involved simultaneous firing of five F-1 engines. NASA now is preparing the B-2 position on the stand to test the core stage of its new Space Launch System, which will involve the simultaneous firing of four RS-25 engines. 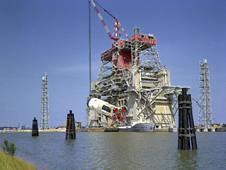 An Apollo Saturn S-IC rocket stage is removed from the B-1/B-2 Test Stand at NASA's John C. Stennis Space Center on Aug. 28, 1968. The Saturn V stages were used on Apollo missions that carried humans to the moon in the late 1960s and early 1970s. 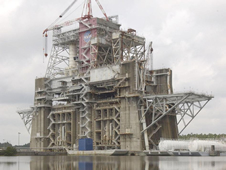 The B-1/B-2 Test Stand is a dual-position, vertical, static-firing structure built at NASA's John C. Stennis Space Center in the 1960s. First stages of the Apollo Saturn V rocket were tested on the stand from 1967 to 1970. Stennis now leases the B-1 test position to Pratt & Whitney Rocketdyne for testing of RS-68 engines. It is preparing the B-2 test position to test the core stage of NASA's Space Launch System in late 2016 and early 2017. The SLS stage, with four RS-25 rocket engines, will be installed on the stand for propellant fill and drain testing and two hot-fire tests.
Find this article at:http://www.nasa.gov/centers/stennis/news/newsreleases/2013/CLT-13-132-cptn.html