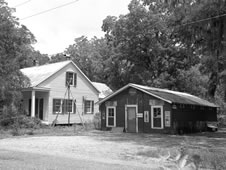 The town of Gainesville was once a thriving community in South Mississippi. However, by the time NASA acquired the land for the Stennis Space Center, most of the community had moved on to new locales, leaving only about 100 residents. Still, the Loveless House (left) and Grocery remained, both owned by Mrs. Louise Elizabeth Loveless. The grocery was the only store – and the last business – in Gainesville by the 1960s. 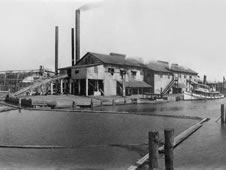 In its heyday, the H. Weston Lumber Co. sawmill in the South Mississippi community of Logtown along the Pearl River was said to be the largest sawmill in the nation. The mill and the town thrived in the early 1900s, then went into decline. There were only about 250 people left in the community by the time NASA acquired the property for the Stennis Space Center in the early 1960s.
› Back To Top