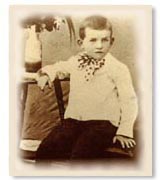 The courtly senator from Mississippi who was unanimously elected president pro tempore of the Senate for the 100th Congress also served as Chairman of the Senate Armed Services Committee, 1969-1980. Senator Stennis stood firm for U.S. military superiority and was a staunch supporter of the National Aeronautics and Space Administration (NASA). The word "statesman" is the term that is most associated with this great American, who began his career as a farmer in the gentle hills of Kemper County, Mississippi. From his roots there, he adopted a simple motto early in his political career that became his creed and the foundation for his steadfast devotion to honesty and hard work in every task he undertook: "I will plow a straight furrow right down to the end of the row."

The presidents with whom he served, from Truman to Reagan, recognized his honesty and integrity, and all turned to him for help and counsel during difficult times. Every president knew of Senator Stennis' high standing with his colleagues and recognized the influence he carried within the Senate. He always kept his relationships with the presidents in what he believed to be their proper perspective. When asked how many presidents he served "under," Stennis replied, "I did not serve under any president. I served with eight presidents." His influence and power spanned the 41 years he served in the Senate.

The Washington Star wrote in 1975, "Stennis is 'Mr. Integrity,' the embodiment of honor and fairness."

In 1982, the Washington Post wrote, "No one in the Senate questions Stennis' integrity or contribution to that body. The possessor of a tremendous booming voice, a Phi Beta Kappa key, and a universal reputation for fair-mindedness which has long been one of his dominating features, he is a senator's senator, an advisor to presidents, a man of enormous power and influence."

Three years later, the New York Times said, "He is the undisputed patriarch of the Senate, a teacher to younger members, and conscience for the entire institution. He seldom makes national headlines but he wields considerable influence in the Senate itself and that influence came from the quality of his personal judgement."

In 1986 George Will compared the Senator's long and steady career to the "Big River" that runs along the border of his home state of Mississippi. Will wrote, "Early in many a morning, when John Stennis arrives at work, the United States Capitol is a quiet as vespers. The only voices heard have the soft sound of ashes falling upon ashes. Soon the place is noisy. He never has been, never will be. He is a senator of the old school, the last of that school of no-waste motion and few public flourishes. His talk is lightly laced with regional and archaic phrases as when, speaking of a friend from distant youth, he says, 'He lived over near the Big River.' There is a faint, sweet echo of vanished America in that almost reverent reference to a dominating geographic fact." Will went on to say, "All flesh is as grass but some flesh, like some grass, is especially durable. Few people have ever endured in Washington longer than the senator from Mississippi. May his career flow on, like the Big River." 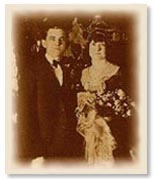 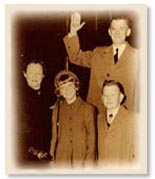 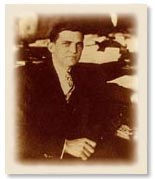 Former Senate Majority Leader, George Mitchell, once stated that: "Some men spend a lifetime striving to achieve and maintain respect. Senator Stennis has lived such a life and set an example for all of us to follow."

Stennis' manners were as polished as his ethics. He once interrupted an important Senate hearing in order to guide a late-arriving woman spectator to a seat. And a dirt-farmer constituent who visited his Senate office received as much courtesy as a Secretary of Defense.

Both publicly and in private, Senator Stennis projected a character with pride, self-respect, extreme honesty, unquestionable integrity and sincerity. He claimed his "image" was due entirely to his strict following of what he called his personal code developed during his upbringing and formative years in Kemper County, Mississippi.

John Stennis was born Aug. 3, 1901, in the Kipling community, about eight miles south of DeKalb. His parents were Hampton Howell and Cornelia (Adams) Stennis. He came from a long line of country doctors, though his father was a farmer and merchant in DeKalb. His father taught him responsibility and hard work at an early age, tenets he would incorporate into his personal code and practice in every aspect of his life. He had three older sisters who practiced their "school teaching" on him, giving young John a head start with special tutoring in manners as well as the books. His mother carefully trained him to always "do his best and look his best."

It was this type of family background and preparation that helped mold the 18-year-old farm boy who stepped off the train at Mississippi A&M (later to become Mississippi State University) in the fall of 1919. He quickly formed friendships and developed the confidence that would give him opportunities for service unsurpassed by anyone in Mississippi history. By the time he graduated in 1923, he was showing signs of the leadership that would become legend.

Senator Stennis put great stock in education or "training," but he also knew that education was not the only preparation needed. He once told an interviewer that his mother and father missed a college education because of "the war," meaning the Civil War. "Down there for the last hundred years," Stennis said, "people lacked for money and lacked for worldly things. But they got plenty of things money can't buy-like good neighbors, good friends, and the community spirit of sharing with the other fellow."

After graduation from Mississippi State University, Stennis went on to the University of Virginia in 1924 and convinced the dean of the law school to accept him without ever filing an application. His education there was interrupted, however, when his father died, and he returned to the family farm.

During this interim period away from law school, Stennis' friends and neighbors urged him to seek an open seat in the Mississippi House of Representatives. He was elected and took the oath of office in January 1928, beginning a career in public service that would span more than 60 years without a break. Political historians believe that to be a record for this country.

State Representative Stennis went back to the University of Virginia in the fall of 1928 to finish law school. He continued to excel, actually memorizing the entire United States Constitution while compiling an academic record that earned him the Phi Beta Kappa key.

On Christmas Eve of the following year he married Coy Hines, a native of New Albany, Mississippi, who was serving at the time as the Kemper County home demonstration agent. They built and moved into a white frame house just south of DeKalb.

In 1932, John Stennis was elected district prosecuting attorney. People throughout the district came to know Stennis as a hard-working prosecutor who stood for what was right and unyielding in the face of adversity. It was during these years in DeKalb that the Stennis children were born: John Hampton, March 2, 1935; and Margaret Jane, Nov. 20, 1937.

Stennis was appointed to fill the seat of a circuit judge when a vacancy occurred due to a death in 1937. For the next 10 years, Judge Stennis gained the respect of all,and his reputation spread far beyond his district.

When U.S. Senator Theodore G. Bilbo died in office in 1947, Judge Stennis entered the race for his seat. It was a grass roots campaign in which Stennis promised to "plow a straight furrow right down to the end of my row." He was elected against formidable opposition and began to build national recognition as the junior senator from Mississippi. His reputation for integrity spread quickly among his colleagues, who learned that they could depend on what John Stennis said.

He demonstrated courage along with his convictions. As he earned the respect of the giants of the Senate, he gained key committee assignments that gave him the opportunity to be a major participant in decisions of vital importance to the nation as well as his home state.

Time and again during his 41 years of service, the Senate turned to John Stennis for guidance when its members or its customs were under suspicion, and when an impartial and fair assessment seemed vital. From the McCarthy era to Watergate, Stennis applied both the judicial skills and temperament he acquired during his 10 years on the bench in Mississippi.

His support of NASA led President Ronald Reagan in 1988 to rename the National Space Technology Laboratories (NSTL) the John C. Stennis Space Center. At the dedication ceremony, Mississippi Governor Ray Mabus stated, "Senator Stennis has received a lot of honors but none more symbolic than this one. Throughout his career he has been a man of vision . . . who has helped guide this nation to new frontiers."

Senator Stennis' unselfish achievements during his long years of hard work did not come without great adversity. In 1973 he was shot twice during a holdup attempt in his front yard in northwest Washington, D. C. Although doctors didn't at first give much hope of Senator Stennis' survival, then later of ever walking again, he surprised practically everyone and recovered almost completely. He said his chief thought during those doubtful days was, "Would I be useful?" Senator Stennis' dedication and commitment to duty would not allow him to stop or slow down.

In 1983, his wife, affectionately known as "Miss Coy," died, and he underwent heart surgery. On December 1, 1984, his left leg was amputated to remove a cancerous tumor. Again Stennis came back and continued to serve his country, setting a pace for senators many years younger to follow.

John Stennis retired from the Senate in 1988 and returned home to teach at Mississippi State University. On April 23, 1995, at the age of 93, former Senator John C. Stennis passed from this life, leaving behind a remarkable legacy. This statesman, who had obtained widespread influence as he ascended to the highest pinnacles of power in Congress, never lost his perspective nor his desire to benefit those with whom he always said the power ultimately resided-the people. His exemplary leadership and wise counsel are sorely missed. 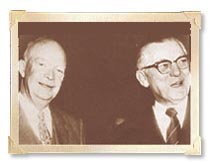 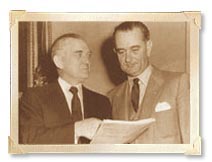 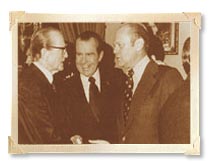 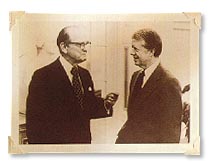 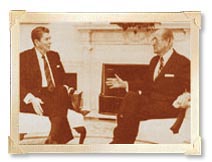