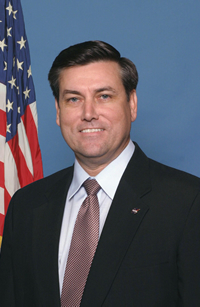 Patrick Scheuermann served as director of NASA’s John C. Stennis Space Center near Bay St. Louis, Miss. As director, he provides executive leadership, overall direction and management of the center. He is responsible for implementing NASA's mission in the area of rocket propulsion testing, developing and maintaining NASA's world-class rocket propulsion test facilities, and ensuring Stennis serves as the systems engineering center for applied science activities assigned by the agency. He serves as a federal manager hosting an integrated multi-agency federal laboratory. Stennis is a unique federal city that is home to more than 30 federal, state, academic and private organizations and numerous technology-based companies.

Scheuermann was named deputy director at Stennis in December 2008, and served as associate director prior to that time. He also served as chief operating officer of NASA's Michoud Assembly Facility in New Orleans, where he was responsible for day-to-day management and operation, and leading its recovery in the aftermath of Hurricane Katrina.

From 1998 to 2000, Scheuermann served in Washington, D.C. as a legislative fellow for U.S. Senate Majority Leader Trent Lott of Mississippi, as a participant in the Congressional Fellowship Program. Until his move to the nation’s capitol, he was responsible for strategic investment planning and capability assessments at Stennis.

Since joining NASA in1988 as a propulsion test engineer, Scheuermann has also worked numerous major test projects at Stennis including serving as project manager for NASA's Reusable Launch Vehicle program, a NASA-industry effort to develop a new generation of safe and cost-effective rockets to send payloads to space. He also was project manager for the Evolved Expendable Launch Vehicle program, an Air Force-led effort to build a family of expendable rockets that would reduce the costs of launching U.S. payloads into space.

The New Orleans native received a bachelor's degree in mechanical engineering from the University of New Orleans. He has received numerous honors, including NASA's Outstanding Leadership Medal and NASA's Exceptional Service Medal. He was a finalist in NASA's astronaut candidate selection program in 1998. He successfully completed the Senior Executive Service Candidate Development Program in 2005.

Scheuermann and his wife, the former Sarah Melissa Lee of Pearl River County, Miss., live in Slidell, La., with their son and daughter, Chandler and Christina.