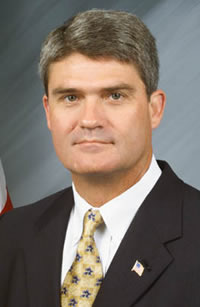 As Space Shuttle Program Manager, Parsons led the Return to Flight activities for the agency and played a major role in the recent success of the Discovery STS-114 mission. His first stint as Stennis center director came in August 2002. He was first assigned to Stennis in 1997 as the chief of operations of the Propulsion Test Directorate. Parsons relocated to NASA Johnson Space Center, Houston, to become the director of the Center Operations Directorate. He later served as the deputy director of Johnson. He returned to Stennis in 2001 and served as director of the Center Operations and Support Directorate.

Parsons has received numerous honors, including NASA's Exceptional Service Medal; the National Intelligence Medal of Achievement; the Silver Snoopy, awarded by astronauts for outstanding performance in flight safety and mission success; the Center Directors' Commendation; and the Commandants Certificate of Commendation from the U.S. Marine Corps.

He began his career in the United States Marine Corps as an Infantry Officer, then worked as a manufacturing engineer and later as an aerospace engineer at Cape Canaveral Air Force Station in Florida. In 1990, Parsons joined the NASA team at Kennedy Space Center as a Launch Site Support Manager in the Shuttle Operations Directorate and also worked as an Executive Management Intern and later as the Shuttle Flow Director of the Shuttle Operations Directorate at KSC. In 1996, he became Manager of the Space Station Hardware Integration Office at KSC.
› Back To Top