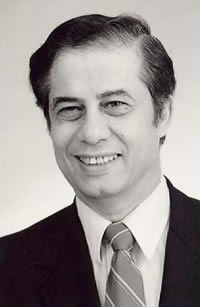 Jerry Hlass was named "manager" of the Stennis Space Center, known then as the National Space Technology Laboratories (NSTL), September 1, 1976, during a critical phase in the evolution of the center's history. Hlass's tenure of nearly 13 years saw the Center undergo major changes as he improved the infrastructure and added new programs. He consequently became the first director of the facility in 1988.

Before Hlass accepted the assignment of taking over the reins of the NSTL in 1976, NASA Headquarters had considered withdrawing the NASA management team from the installation. The small NASA on-site management team was responsible for providing support services to about 18 federal and state agencies and providing technical support to the MSFC in the Shuttle test program. At the same time, however, the Earth Resources Laboratory (ERL) was at the site, but it answered to the Johnson Space Center, and the Space Shuttle Test Complex was under Marshall Space Flight Center (MSFC) management.

Hlass believed that NASA should be far more influential in the center's management role. During his years as manager and director of the installation, Hlass was able to bring the ERL under NSTL management and assume a much more direct and meaningful part in its test support role in the Space Shuttle Program. Through his tireless work Hlass gained the confidence of NASA Headquarters officials and respect of the Marshall test team and the many other agencies in residence. As a result, the work accomplished by Hlass has been said to have resulted in the "renasafication" of the installation.

In May 1988, NSTL was renamed the NASA John C. Stennis Space Center by President Ronald Reagan and the installation finally reached the independent status its leadership had sought for nearly three decades. There is no doubt that Hlass's leadership and tenacious management techniques were paramount in setting the stage for this new designation.

Before coming to Mississippi as director of the NSTL in 1976, Hlass was in charge of Space Flight Facilities nation-wide for NASA. He had earlier been in charge of facilities for the Agency nationwide during the 1960s when the Mississippi Test Facility was under construction. In that capacity, Hlass had made many trips to the site as he monitored the construction project.

Hlass graduated from North Carolina State University with an engineering degree and holds a master's degree in technical management from George Washington University.