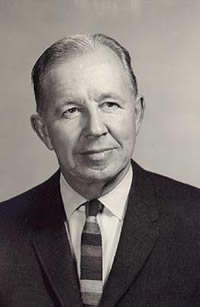 Navy Captain William C. "Bill" Fortune was the first "manager" of the NASA Stennis Space Center, known then as the Mississippi Test Operations. At the time Marshall Space Flight Center Director Wernher von Braun appointed Fortune to head up the Mississippi project in 1962 before construction on the giant rocket testing facility begun.

Von Braun knew the task of building the facility, developing the organization to operate it and forging the strong friendships in the communities surrounding the installation would be an awesome task. For that reason, von Braun asked Fortune, who was a friend and colleague, to come to Mississippi.

Captain Fortune took charge of the project and got the monumental project underway, building unique and massive facilities in some of the most notorious swamps in the country. The coordination of the project, between NASA, the Corps of Engineers and private companies, was most difficult and intricate.

Fortune became known as an "officer and a gentleman" and quickly cemented close relationships with the people in the surrounding communities and throughout the State of Mississippi. His legacy is still remembered and employees coming to the Stennis Space Center today enjoy the fruits of his early labors.

Captain Fortune had a distinguished 31-year career in the Navy as a pilot, researcher and pioneer in rocketry. In 1947, he was responsible for launching the first large missile ever from the deck of the U.S.S. Midway. Fortune, who was also a staunch supporter of America's Orbiter program holds a bachelors and masters of science degree in electrical and aeronautical engineering from the Naval Academy and the Massachusetts Institute of Technology respectively.