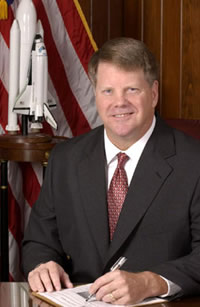 Prior to becoming center director, Admiral Donaldson served as commander of the Naval Meteorology and Oceanography Command headquartered at Stennis. This worldwide organization provides oceanographic, meteorological and mapping services to naval forces around the globe. He was selected for Rear Admiral (lower half) in February 2000 and took command of the Naval Meteorology and Oceanography Command in November 2000. In April 2001, he was designated Hydrographer of the Navy by the Chief of Naval Operations, representing the United States' naval interests internationally. Admiral Donaldson retired from the United States Navy in December 2003.

He began his career in the United States Navy as a Midshipman in 1971 and was commissioned in 1975 at the U.S. Naval Academy. His subsequent assignments included tours in engineering, operations, personnel and leadership positions. His career involved a unique blend of service on ships, submarines and in aircraft.