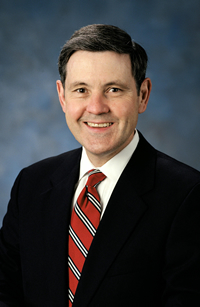 Robert D. Cabana served as director of NASA's John C. Stennis Space Center near Bay St. Louis, Miss, in 2007-2008. He provided executive leadership and overall direction and management of the center and was responsible for implementing NASA's mission in the areas of rocket propulsion testing, developing and maintaining NASA's world-class rocket propulsion test facilities, and ensuring Stennis serves as the systems engineering center for Applied Science activities assigned by the agency. He also served as a federal manager hosting an integrated multi-agency federal laboratory. Stennis is a unique federal city that is home to more than 30 federal, state, academic and private organizations and numerous technology-based companies.

Originally from Minneapolis, Minnesota, Cabana graduated from the U. S. Naval Academy in 1971, with a bachelor of science degree in mathematics and was commissioned as an officer in the U.S. Marine Corps. He is a distinguished graduate of the U.S. Naval Test Pilot School and has logged over 7,000 hours in 36 different aircraft.