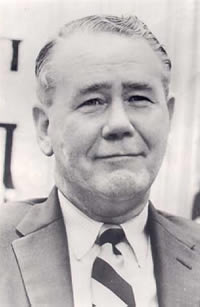 Jackson M. Balch became the Stennis Space Center's second installation manager when the facility was known as the Mississippi Test Operations. He became its first designated "director" while the site was still operating under the auspices of the George C. Marshall Space Flight Center.

Known throughout NASA as a "maverick" with his daring management techniques, Balch was largely responsible for the transformation of the facility from a purely rocket testing facility into a multiagency scientific research center. Throughout this evolution occurring during the 1970s, a number of federal and state agencies involved in space applications, oceanography and environmental sciences located at the center. As a result, these agencies have been able to work together in a unique government arrangement that continues to this day.

Marshall Center Director Wernher von Braun appointed Balch to take over the reins from Captain Bill Fortune in May 1965 when construction and activation of the $300 million test facility neared its peak. Balch's experience previous to his appointment included serving as a technical assistant to von Braun, as a colonel in the Alabama National Guard and as an aide to General Douglas MacArthur at the end of World War II. The experiences uniquely prepared him for the monumental leadership task of managing the efforts of NASA, the Corps of Engineers and approximately 250 private contractors engaged in the building of the site.

In addition to Balch's management experience, he also brought an extensive and varied educational background that proved most helpful as the center diversified. He was born in Yarmouth Nova Scotia, Canada; graduated high school from the American School in Monterrey, Mexico; received a bachelor of engineering degree from Trinity College in Dublin, Ireland; a master of arts degree in economics from the University of North Carolina; and completed extensive graduate work in industrial engineering at the Massachusetts Institute of Technology. Balch was also proud of his studies at the War College at Maxwell AFB, Montgomery, Alabama.