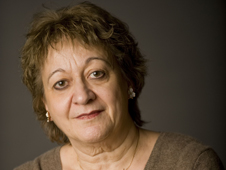 Dr. Chryssa Kouveliotou, an astrophysicist at NASA’s Marshall Space Flight Center in Huntsville, Ala., was selected by Time magazine’s New Space Discoveries, a special publication on space, as one of the twenty-five most influential people in space. (NASA/MSFC)
View large image 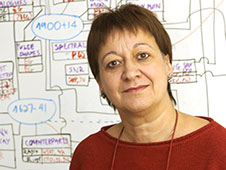 The caption under Kouveliotou's photo in the publication reads: "Gamma-Ray Argonaut. As a child growing up in Greece, Chryssa Kouveliotou spent summer nights lying on the beach searching the sky for falling stars and tracings of satellites. Her determination to explore the heavens graduated to more exotic phenomena. 'My first love was always gamma-ray bursts,' recalls Kouveliotou, of NASA's Marshall Space Flight Center, 'tremendous explosions that rock the universe like nothing else.' One source of gamma rays is magnetars, the tiny, superdense remains of supernovas that generate the most powerful magnetic fields in the universe; imagine a magnet strong enough to pull the keys out of your pocket from a distance halfway to the moon."

Kouveliotou, a NASA astrophysicist since 2004 and longtime collaborator on the agency's science mission, has been the principal investigator on numerous research projects in the United States and Europe. She currently is a co-investigator on the Gamma-ray Burst Monitor, an instrument flying aboard the Fermi Gamma-ray Space Telescope; a Swift associated scientist; and a member of the NuSTAR Science Team. Over her career she has worked on multiple, high-value missions: the International Sun Earth Explorer-3, the Solar Maximum Mission and the Burst And Transient Source Experiment (BATSE), which flew on NASA's Compton Gamma-Ray Observatory.

Throughout her career, Kouveliotou has made numerous contributions to the fields of astronomy and astrophysics. Her research has expanded our scientific understanding of fleeting, transient phenomena in the Milky Way galaxy and throughout the high-energy universe. Besides determining the unique properties of the highly energetic emissions from gamma-ray bursts -- the brightest and most powerful events in the universe -- she was part of the team which first revealed the extragalactic nature of these sources. She and her team made the first confirmed detection of ultra-dense neutron stars called magnetars – the cinders of stars left over after a supernova, which have incredibly powerful magnetic fields.

Kouveliotou has received many awards for her work, including the 2012 Dannie Heineman Prize in astrophysics, the NASA Exceptional Service Medal in 2012, the Rossi Prize in 2003, the Descartes Prize in 2002 and the NASA Space Act Award in 2005. She has published 382 papers in refereed journals and has been among the top 10 most-cited space science researchers in published journals worldwide.