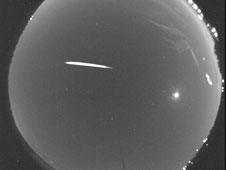 Composite photo of the meteor as seen from the Marshall Space Flight Center. Image credit: NASA/MSFC
View large image
On the evening of May 18, NASA all-sky meteor cameras located at NASA’s Marshall Space Flight Center and at the Walker County Science Center near Chickamauga, Ga. tracked the entry of a large meteor estimated to weigh some 60 pounds over northeastern Alabama. This meteor was first picked up at an altitude of 47 miles over northwest Huntsville, moving at a speed of 8 miles per second toward the southeast. It was last visible northeast of Gurley at an altitude of 23 miles. The meteor was quite bright, with an intensity rivaling that of the waxing crescent moon (in astronomical terms, it was about visual magnitude -8.3).

Calculations automatically performed by the tracking software indicates that this interloper was from the main asteroid belt, moving in an orbit which takes it more than three times Earth's distance from the sun.

Expert opinion is that one or more pieces of this meteor survived to make it to the ground as meteorites, and calculations indicate that the area of the fall lies north of a line joining Woodville and Scottsboro. Residents who saw the meteor on the night of the 18th, or those who may have noticed or picked up an unusual rock in the vicinity are requested to contact the NASA Meteoroid Environment Office at the Marshall Space Flight Center. Eyewitnesses are asked to give a detailed description, including the time of the sighting, and those who suspect they have a meteorite are requested to give the location of the find and provide a digital photo of the object.

Composite photo of the meteor as seen from the Marshall Space Flight Center. Image credit: NASA/MSFC
View large image Contact for the Meteoroid Environment Office: Dr. Bill Cooke at 256-544-9136 or by email at william.j.cooke@nasa.gov