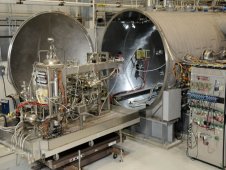 The Stirling engine test configuration upon removal from the vacuum chamber. Image credit: NASA/MSFC/E. Given

NASA has made a series of critical strides toward the development of new nuclear reactors the size of a trash can that could power a human outpost on the moon or Mars.

NASA's Marshall Space Flight Center in Huntsville, Ala., offers a one-of-a-kind test facility which, without using nuclear materials, enables engineers to simulate the nuclear power process of heat transfer from a reactor to a power converter.

"The recent tests bear out that Fission surface power system could be an important source of energy for exploration on the moon and Mars," said Mike Houts, project manager for nuclear systems at Marshall. "This power system could provide an abundant source of reliable, cost-effective energy and may be used anywhere on the lunar surface."

For this particular test series, the Marshall reactor simulator was linked to a Stirling engine, developed by NASA’s Glenn Research Center in Cleveland. The Stirling engine, named for 19th-century industrialist and inventor Robert Stirling, converts heat into electricity.

The Marshall reactor simulator included a specialized pump, provided by the U.S. Department of Energy, and a coolant loop filled with a mixture of sodium and potassium. The coolant loop provided heat to the Stirling engine at conditions very similar to an actual fission-based surface power system. The joint testing helped resolve potential integration issues and provided information and experience needed to reduce technology risks associated with this system concept. 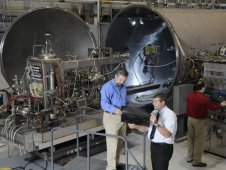 The testing of the Stirling engine with the Marshall reactor simulator may well be a key factor in demonstrating the readiness of fission surface power technology, and could provide NASA with an efficient and robust system to produce power in the harsh environment on the moon and Mars.

NASA's current plan for human space exploration is to return astronauts to the moon by 2020 on expeditions that could lead to a permanent outpost for exploring the lunar surface and testing technologies that could aid a manned mission to Mars.

The space agency has been studying the feasibility of using nuclear fission power generators to support future moon bases. Engineers performed tests in recent weeks as part of a joint effort by NASA and the Department of Energy.

Nuclear fission power plants work by splitting the nuclei of atoms in a sustainable, controllable reaction that releases heat, which can then be funneled through a power converter to transfer that energy into usable electricity.

"A small fission-based nuclear reactor coupled with a Stirling engine could provide up to 40 kilowatts of usable energy, enough to support a moon base or Mars outpost," said Houts. That's about the same amount of power needed to supply eight houses on Earth, NASA officials have said. The test series was conducted as part of the fission-based surface power project, within NASA's Exploration Technology Development Program, which is tasked with developing advanced technologies that will enable NASA to conduct future human exploration missions, while reducing mission risk and cost.

The next step for NASA's fission power project is to combine its radiator, engine and alternator successes into a single non-nuclear power plant demonstration. That test is slated to begin in 2012, NASA officials said.