The Space Launch Initiative:
Technology to pioneer the space frontier

When U.S. Sen. John Calhoun of South Carolina said those words in 1816, the "space" he referred to was the new frontier west of the U.S. Appalachians. Calhoun's proposal was one of many at the federal and state level aimed at supporting the construction of roads, canals and railways in order to improve communications and commerce and ultimately strengthening and expanding the new nation.

Governments have long been associated with discovery, exploration, and the opening of new frontiers in support of national interests. In the 15th century, the royal courts of England, Portugal and Spain financed the explorers who discovered, explored and settled the Americas. In the 20th century, the U.S. government helped foster commercial aviation in the early days of air travel. In the 21st century, NASA is continuing that historic tradition with the Space Launch Initiative, also known as the 2nd Generation Reusable Launch Vehicle (RLV) program, managed by NASA's Office of Aerospace Technology and Marshall Space Flight Center. This program will ultimately move the nation from the explorations of the Mercury, Gemini, Apollo and Space Shuttle missions to a period of pioneering when people and businesses are more routinely traveling, working and living in space.

The Space Launch Initiative is defining the future of human space flight for the nation. The initiative is driven by one inescapable fact recognized by NASA, industry, the White House and Congress: Space launch is prohibitively expensive and risky for all but the most lucrative commercial efforts, such as worldwide broadcasting satellites, and missions of the greatest national importance, such as defense, exploration and scientific research.

Whether it's doing business in Earth-orbit or exploring distant worlds, the first few hundred kilometers are the toughest part of the journey. That's because fully half the energy needed to go to the farthest planets in our solar system is devoted to escaping the Earth's "gravity well" and getting into low earth orbit.

U.S. commercial launch vehicles are based largely on decades-old technology. Foreign companies control the majority of the launch business once dominated by the United States. Even so, almost all U.S. and foreign rockets fail between 1 and 10 percent of the time.

The Shuttle - the nation's first generation reusable system - was developed in the 1970s and began operations in 1981. With improvements for safety and reliability, the fleet is expected to remain in service until at least 2012 or until a second generation system is ready. While the Shuttle opened technological and scientific frontiers, it is not designed to meet the demands of a broader, busier commercial market.

To open space for many more commercial, scientific and personal pursuits and enable exploration of other worlds, space transportation must be much safer, less expensive and more reliable than current commercial launch vehicles or the Shuttle. Transferring NASA's routine space operations needs to the private sector will enable NASA to focus more on science research, technology development and exploration.

The National Space Transportation Policy of 1994 highlighted these problems and assigned NASA the lead role for developing reusable launch vehicle technologies. The National Space Policy, signed in 1996, reaffirmed these goals.

Meeting such highly ambitious goals will require NASA to focus on leap-ahead technologies that U.S. industry can use to regain market share and create new business opportunities in space. In turn, NASA will realize a reduction in space transportation related costs that currently absorb 25 percent of its annual budget.

NASA has initiated several investments aimed at dramatically improving the cost and reliability of getting to space. Working with industry partners, NASA began the X-33, X-34, and X-37 rocket plane projects. The X-vehicles focused on developing key technological advances for second generation reusable launch vehicles on the premise that major growth of the commercial launch market would enable significant private financing of a new RLV - once the technology and business risks were reduced.

Through that work, NASA made substantial progress in understanding future space transportation requirements and emerging RLV technologies. NASA also gained better understanding of the balance between commercial and government interests.

NASA engineers have learned that development along multiple competing and emerging technology paths is needed, up-front, before a new space transportation design can be logically determined. They learned that requirements for a second generation commercial vehicle must be worked in partnership with industry so that NASA requirements converge with commercial capabilities. NASA also learned that commercial markets are not growing as previously projected, but there are still possibilities in the near term to pursue alternate paths that can make access to space more robust.

Today, transferring NASA's space transportation needs to commercial launch vehicles remains the key goal of NASA's space transportation efforts. To earn government support and attract the vast resources of private enterprise, the 2nd Generation program will make additional investments to reduce business and technical risks. Private industry must be confident it can turn a profit with the new RLV, and lawmakers must be sure tax dollars are being invested wisely.

This risk reduction effort is a lesson learned from NASA's experience with its first generation RLV. When NASA started development of a reusable space shuttle in the 1970s, its main engines, solid rocket boosters, and thermal protection system went into development along with it, leading to schedule and cost growth in the Shuttle program.

Investments in the 2nd Generation RLV activity are driven by industry need to assure the highest degree of competition and program success. Earlier studies concluded the highest priority areas for technology investment are crew safety, main propulsion, integrated structures and subsystems. Technology for orbital operations - such as automated rendezvous and docking, propellant transfer, etc. - are also addressed, as well as avionics, operational technologies and more. Ground and flight tests are part of the risk reduction program.

In the program's first two years, a range of risk reduction activities and milestone reviews will gradually narrow viable reusable space transportation systems to two or three candidates. This groundwork will drive a decision for full-scale development of one system by 2006. 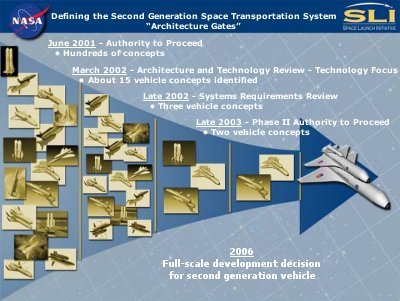 The 2nd Generation RLV program was established in February 2001. Preparation began in March 2000 when industry proposals resulted in the award of nine contracts in an initial step to define detailed requirements and risk reduction options. These companies, which represented both emerging and established launch companies, were part of the effort to ensure that a second generation architecture responds to the needs of a broad range of potential users. In that way, NASA and its industry partners believe the needs of commercial space transportation and the needs of government both will be met.

The studies addressed a space transportation architecture that covers not only possible Earth-to-orbit launch vehicles but also in-space orbit transfer vehicles, ground and flight operations and the technology and infrastructure required to support both.

The risk reduction effort is a NASA-wide effort and also involves the U.S. Department of Defense.

In August 2000, NASA awarded four small businesses 90-day contracts totaling $902,000 to study how to provide contingency cargo launch services for the International Space Station and what technology development or business planning is needed.

Capable of launching within a week if necessary, the contingency cargo service will enhance the Station's operational flexibility if its primary re-supply vehicles -including the Shuttle and international launchers - are unavailable. The service will help encourage a viable commercial U.S. space transportation industry.

The contracts were set aside for small business under the Alternate Access Project of the Space Launch Initiative. Selected for contracts were Andrews Space and Technology and Microcosm Inc., both of El Segundo, Calif.; HMX Ltd. of Reno, Nev.; and Kistler Aerospace Corp. of Kirkland, Wash. With the preliminary work under way, NASA again approached industry, seeking proposals in October 2000. Three broad areas were addressed:

The work of these organizations and dozens more subcontractors from across the nation provided the research and technologies development for the Space Launch Initiative's first milestone review in March 2002. The Architecture and Technology Review narrowed the number of potential next generation reusable space transportation systems to a little over a dozen architectures. Architecture-specific contractors Boeing, Lockheed Martin and a team of Northrop Grumman and Orbital Sciences retained a handful of potential architectures following this review. A Systems Requirements Review beginning in November 2002 will reduce that number to no more than two or three systems. A final architecture will be recommended for full-scale development in 2006.

The budget for the Space Launch Initiative is $4.8 billion through fiscal 2006.

2nd Generation perspective: a look back and a look forward

In historical context, the 2nd Generation program is important for very down-to-earth reasons. Throughout history, thriving economies have relied on ready access to transportation to enable exploration and trade. In the case of commercial aviation, the U.S. aerospace industry led the U.S. economy in worldwide net exports, exceeding agriculture by a factor of two. That economic dynamo didn't arise overnight. Over the last century, at least six generations of aircraft have been developed, starting with the Wright flyer and ending with the Boeing 777. Major technological advances led to more capable aircraft and new markets from mail, passenger service, package delivery and interstate commerce. Each contributed to our nation's economic health. Investment in space transportation will lead to similar results in the worldwide commercial space marketplace.

With new technologies and operations, safety, reliability and affordability will be greatly enhanced over what we have today. The cost of delivering a payload will drop dramatically from today's price of $10,000 per pound.