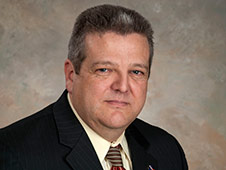 Robert Champion is deputy director of NASA's Michoud Assembly Facility in New Orleans. Named to the positions in February 2012, he is responsible for the day-to-day management of the facility and works to build a broader base with government, university and private sector entities. He also manages the facility operations contract with Jacobs Technology, based in Tullahoma, Tenn.

Mr. Champion was acting deputy director and chief operations officer from 2010 of the Michoud Assembly Facility until his current appointment. From 2007 to 2010, he was division chief of the Stage Systems Engineering and Integration Office in the Engineering Directorate at the Marshall Space Flight Center in Huntsville, Ala. He managed a team of 165 civil servants and contractors responsible for the technical integration of the subsystems that comprised the Ares I upper stage.

From 2004 to 2007, Mr. Champion served as deputy manager, chief engineer and technical manager in the Propulsion System Engineering & Integration Office in Marshall's Space Shuttle Propulsion Office. From 2003 to 2004, he was the NASA project manager for the Boeing Orbital Space Plane Project, designed to conduct missions to and from the International Space Station. From 2001 to 2003, he managed the Auxiliary Propulsion Project for the Next-Generation Launch Vehicle Program.

In 2000, he served as manager of Marshall's Internal Relations and Communications Department, responsible for center-wide events and managing such employee communication tools as the center's weekly newspaper, the Marshall Star.

As lead for the Vehicle Propulsion System team from 1999 to 2000, he coordinated group support for projects such as the Chandra X-ray Observatory -- the world's most powerful X-ray telescope -- and the X-34 Main Propulsion System -- an air-launched, reusable liquid rocket system demonstrator. From 1994 to 1999, he served as team lead for the design of the X-34 main propulsion systems.

Mr. Champion began his NASA career in 1986 as a propulsion engineer in the Preliminary Design Office at the Marshall Center. A native of Woodstock, Ala., he earned a bachelor's degree in aerospace engineering from Auburn University in Auburn, Ala., in 1986.

In 2010, he completed the candidate development program for the Senior Executive Service – the personnel system covering top managerial positions in approximately 75 federal agencies. Mr. Champion has received numerous awards throughout his NASA career, including the NASA Exceptional Achievement Medal in 2011. The medal is awarded to an individual in the federal service for a significant, specific accomplishment or substantial improvement in operations, efficiency, service, financial savings, science or technology which contributes to the NASA mission. He was awarded the NASA Medal for Exceptional Service in 2007 for technical leadership in space shuttle propulsion systems. He received a Space Flight Awareness Award in 2006 for dedication to quality work and flight safety, and a Director's Commendation in 1998 for exceptional leadership of the X-34 Main Propulsion System product development team. He received the NASA Contracting Officers Technical Representative of the Year Award in 2003. He also has received several NASA Special Service Awards and NASA Group Achievement Awards.

Mr. Champion and his wife, the former Maria Speakes of West Blocton, Ala., have four children and reside in Huntsville.
› Back To Top