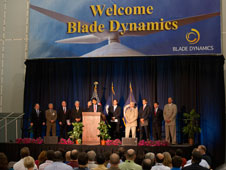 "This is the next chapter in this storied facility that has done so much for NASA and this nation," said Lightfoot.

"This is a huge win for New Orleans and our whole state," said Jindal. "By recruiting Blade Dynamics and its revolutionary wind power technologies to Louisiana, we are creating hundreds of high-paying new jobs in New Orleans while diversifying the economy of this region.

"These will have a very positive impact on the environment and create hundreds of skilled jobs here in Louisiana," said Botha. He added that NASA, the state and the Jacobs team were vital in bringing Blade to Michoud.

"While this is significant for the state and the local area in terms of jobs, green energy and tax revenue, it is an even more significant accomplishment on the part of the NASA and Jacobs team," said Steve Doering, MAF Manager.

Gov. Jindal said Blade will eventually employ 600 workers at Michoud and create hundreds of secondary jobs. Louisiana Economic Development provided an incentive package worth up to $30 million to help bring Blade to MAF.

Blade is partnering with Dow Chemical and American Superconductor Corp. on the project.
› Back To Top