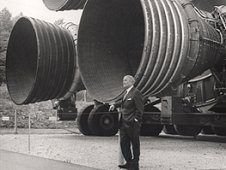 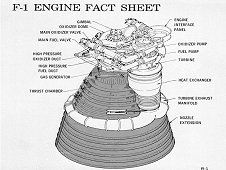 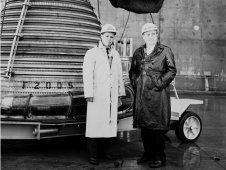 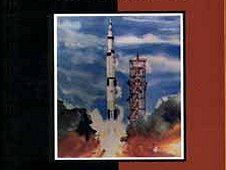 View full image
Stages to Saturn e-book "We should not let our determination waver, and I do not believe that we shall. We have taken the first steps into space, and the world will never be the same again." -- Wernher Von Braun

On May 25, 1961, President John F. Kennedy delivered a speech to Congress in which he declared, "I believe that this nation should commit itself to achieving the goal, before this decade is out, of landing a man on the moon and returning him safely to Earth." On that same day, over 2,600 miles away at Edwards Air Force Base in California, the F-1 engine was being tested for the first time.

Developed by Rocketdyne for NASA under the direction of Marshall Space Flight Center, the 19 feet high and over 12 foot wide F-1 Liquid Propellant Rocket Engine (LPRE) remains the largest, most powerful single-nozzle, liquid fueled rocket ever made. The cluster of five engines powered the first stage of the Saturn V launch vehicle that was capable of placing 280,000 pounds of payload into low-Earth orbit. Each of the bell-shaped F-1 engines weighed over nine tons, generated 1.5 million pounds of thrust, and had a potential energy output equal to the power of eighty-five Hoover dams. Numerous test firings of the mammoth engine were conducted at Marshall Space Flight Center from 1963 to November of 1966 with a testing of the full complement of the five F-1s that made up the S-IC stage on April 16, 1965. Overall a total of ninety-eight engines were produced and sixty-five engines were flown on 13 Saturn V missions from 1967 to 1973.

For more information on the F-1 engine follow the links on this page or contact the Marshall Space Flight Center History Office at 256-544-6840.