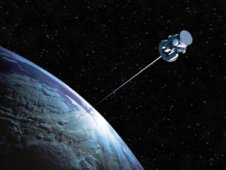 Artist concept of the T-Rex tether after full deployment (300 meters) as it would be seen if you were looking down upon it from space. (NASA)

T-REX is a Space TetheR Experiment (T-REX) promoted by the Japanese Aerospace Exploration Agency (JAXA), in collaboration with NASA.

A Japanese led international team is developing a suborbital test of an electrodynamic tether which may one day enable spacecraft to maneuver in space without the use of any propellant. The tether experiment, called T-Rex, will be launched from Uchinoura, Kagoshima, Japan in 2009. The T-Rex will deploy a tape with a width of 25 mm, thickness of 0.05 mm, and 300 m in length. The experiment will build on several previous space tether experiments and take this technology one step closer to reality.

The experiment will be launched by a Japanese S-520 Sounding Rocket. During ascent, and above ≈300 m in attitude, the tape tether will be deployed at a rate of ≈4 m/s. Once deployed, the tape tether will serve as an anode, collecting ionospheric electrons. The electrons will be expelled into space by a hollow cathode device, thereby completing the circuit and allowing current to flow. Though it will not be measured, the Earth’s magnetic field will exert a force on the tether, providing propulsion without the use of fuel. 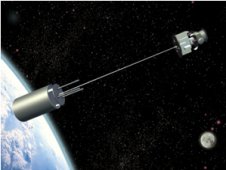 Artist concept of the T-Rex shortly after the tether deployment begins. (NASA)

The T-Rex is a Japanese-led experiment with Professor H. A. Fujii at the Kanagawa Institute of Technology/Nihon University as the principal investigator. NASA is an invited participant and the Advanced Concepts Office is providing a co-investigator on the mission science team.
› Back To Top