Only Two More Weeks to Donate to CFC! 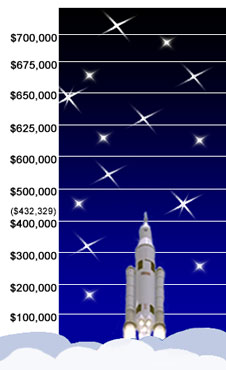 The Marshall Space Flight Center's 2012 Combined Federal Campaign runs through Dec. 15. So far, Marshall's workforce has contributed $432,329 toward the center's $700,000 goal. To donate, or to browse a comprehensive list of qualified charitable organizations, visit here. Contractor team members also may make a one-time donation through their CFC organization leads or assigned monitors. For a complete list of organization leads, visit the CFC ExplorNet page.


Marshall Team Members Get Involved in CFC
By Megan Davidson 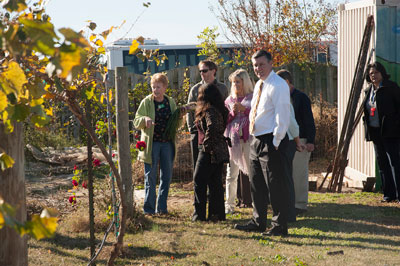 A group of Marshall Space Flight Center team members recently took a tour of the Care Assurance System for the Aging and Homebound, or CASA, of Madison County. The nonprofit agency, which is supported by Combined Federal Campaign donations, provides services to individuals age 60 and older, and to the homebound of all ages. Marshall team members, including Marshall Center Director Patrick Scheuermann, in the foreground, check out the CASA Community Garden. All produce from the CASA garden -- which is planted, maintained, harvested and distributed entirely by volunteers -- is delivered to elderly and homebound clients throughout Madison County. The Marshall team's visit to CASA was one of a number of CFC bus tours, in which team members visit charitable organizations to get a first-hand look at how CFC dollars help these organizations in the community. (NASA/MSFC/Emmett Given) 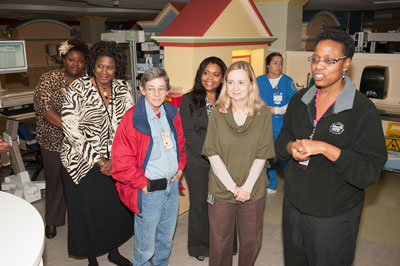 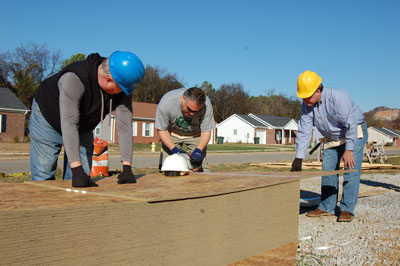 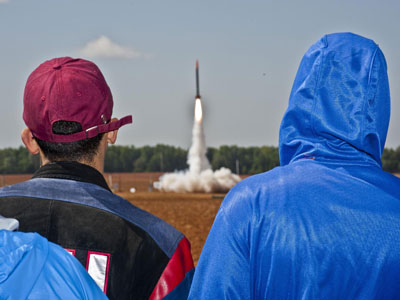 Organizers of the NASA Student Launch Projects have announced the 57 student teams whose inventive creations will soar skyward in April during the agency's 2012-13 rocketry challenge.

Image right: Students watch a rocket lift off at the NASA Student Launch Projects' spring 2012 launchfest at Bragg Farms in Toney, Ala. (NASA/MSFC)


Representing schools in 26 states around the country, participating teams each will design and build a large, high-powered rocket, complete with a working science or engineering payload and capable of flying to the target altitude of 1 mile.

The rocketry challenge, like numerous other NASA Education initiatives, is designed to encourage young people to pursue careers in the science, technology, engineering and mathematics, or STEM, fields.

"Every year, the NASA Student Launch Projects build on our students' classroom studies in an energizing, exciting way," said Tammy Rowan, manager of the Academic Affairs Office at the Marshall Space Flight Center, which organizes the event. "It's great fun, but it also reflects the real-world complexity of planning missions, building flight hardware and completing tough pre-flight checks and reviews.

"We hope the experience is so unforgettable it leads many of them to become the nation's next generation of scientists, engineers and space explorers," she added.

"We are proud to sponsor NASA's student launch competition for the sixth year," said former astronaut Kent Rominger, now vice president of business development for ATK's Space Launch Division. "Each year we are impressed with the level of skill and knowledge these students exhibit. We are very optimistic and excited about the caliber of individuals that could become our future workforce."

Building the powerful rockets and designing and integrating the onboard engineering or science payloads are only two parts of the challenge. Teams also must maintain detailed preliminary and post-launch reports, and build and regularly update a public website to document their rocket-building experience. Each team also must develop an educational engagement program to inspire and educate younger students in their local school system and community.

In 2013, the teams will travel to Marshall, where their rockets will undergo a series of intensive reviews and safety inspections -- a smaller-scale version of the rigorous processes applied to the nation's space vehicles. The culmination of their work is set for April 21, when the students launch their creations one by one into the skies over northern Alabama. Each will be seeking the elusive 1-mile altitude goal, as well as a variety of annual awards for vehicle design, engineering excellence and team spirit. 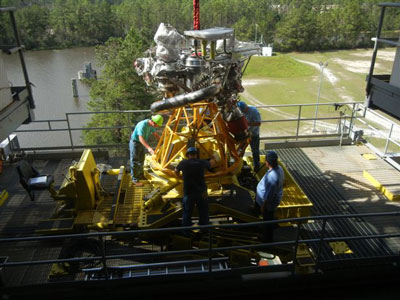 After recently adding more instrumentation to the assembly, workers at the Stennis Space Center install a J-2X power pack in the center's A-1 test stand for more testing. The power pack, a system of components on the top portion of the engine, has been hot-fire tested 10 times for a total of 4,162 seconds. The engine and power pack are built by Pratt & Whitney Rocketdyne of Canoga Park, Calif., to support the Space Launch System, managed at the Marshall Space Flight Center, and will usher in a new capability in human space exploration, taking astronauts beyond low Earth orbit. (NASA/SSC)

Come spread a little holiday cheer at the annual Marshall Space Flight Center rocket-lighting ceremony! The festive event will be held at 4:45 p.m. Nov. 30 at Marshall's Rocket Park. Guests can enjoy hot chocolate and cookies, while listening to a few holiday favorites sung by children from the Marshall Child Development Center. A special visitor from the North Pole also will join in the celebration.

All members of Team Redstone -- which includes the Marshall Center and U.S. Army organizations on Redstone Arsenal -- are invited to attend. 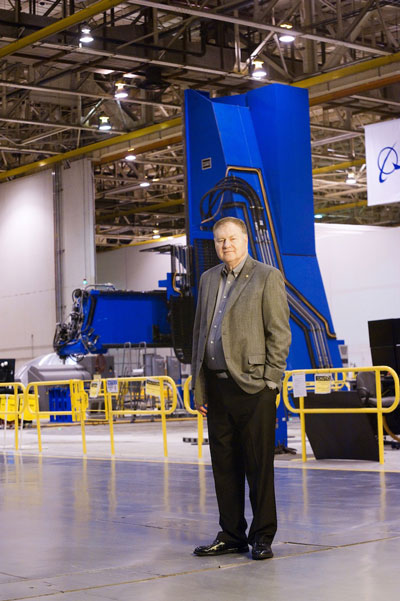 The Huntsville Alabama L5 Society, or HAL5, will host Marshall Space Flight Center's Space Launch System Program Manager Todd May on Dec. 6 at 7 p.m. as he presents "Going Boldly Beyond: Progress on NASA's Space Launch System." The free event, open to the public, will be held at the Huntsville-Madison County Public Library's main auditorium at 915 Monroe St.

May will update the community on the status of the nation's new heavy-lift launch vehicle, now starting its second year of work and set for its maiden voyage in 2017. Responding to a challenging political and budgetary environment, the SLS Program is making visible progress on its hardware design, development and testing, with the first flight hardware being manufactured for launch on the Orion Multi-Purpose Crew Vehicle's flight test in 2014. May, a long-time proponent of cutting-edge science and human exploration of the solar system, looks forward to discussing how SLS is turning plans into progress with Huntsville's space advocacy community.

HAL5 is the Huntsville chapter of the National Space Society, and works to keep Huntsville and its neighbors informed of the positive benefits of space research. Members share the enthusiasm that space development can stimulate our world with immeasurable benefits in the areas of education, energy, the environment and industry.

For more on HAL5 and the event, visit www.HAL5.org. 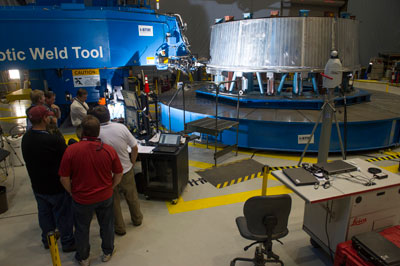 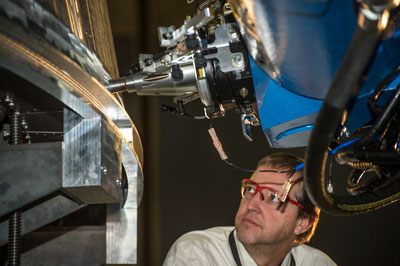 Andre Paseur, a welding technician at the Marshall Center, inspects a circumferential weld of the pathfinder version of the adapter design that will be used on test flights of the Orion spacecraft and the SLS. The circumferential weld on the pathfinder is difficult because the welding machine must control a complex weld path. The data and experience gathered from this weld are invaluable to Marshall Center engineers as they prepare to perform the same task on flight hardware in 2013. (NASA/MSFC/Emmett Given) 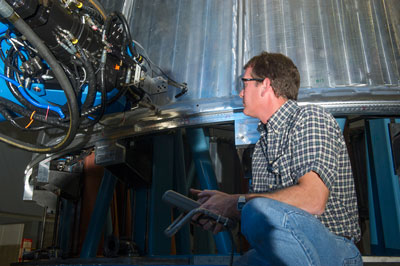 Ronnie Renfroe, a materials engineering technician at the Marshall Center, guides a circumferential weld of the pathfinder version of the adapter design that will be used on test flights of the Orion spacecraft and the SLS. The SLS will launch NASA's Orion spacecraft and other payloads beyond low Earth orbit, providing an entirely new capability for human exploration. The Marshall Center manages the SLS Program for the agency and works closely with the Orion Program office at the Johnson Space Center and the Ground Systems Development and Operations Program, which manages the operations and launch facilities at the Kennedy Space Center. (NASA/MSFC/Emmett Given) 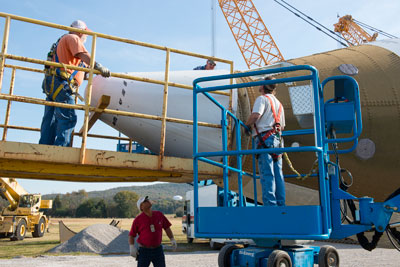 A space shuttle solid rocket booster is the latest addition to the "propulsion park" outside Building 4205, the Propulsion Research & Development Laboratory at the Marshall Space Flight Center.


The booster symbolizes Marshall's role in the historic shuttle program. It joins a F-1 engine -- the largest rocket engine ever flown and the engine that powered the Saturn V, sending humans to the moon. The propulsion park also features a Nerva nuclear rocket engine that Marshall engineers tested in the 1960s, and an aerospike engine tested as part of late 1990s technology demonstrators. The propulsion park provides a good indication of today's work inside the Propulsion Research & Development Laboratory, which boasts facilities for testing software and hardware for the Space Launch System, the nation's next heavy-lift launch vehicle, as well as facilities that help engineers devise and test advanced propulsion technologies and concepts.

"The shuttle booster and the F-1 engine represent Marshall's propulsion contributions to our nation's human exploration endeavors," said Tom Williams, the head of the Propulsion Systems Department in Marshall's Engineering Directorate. "Our center's expertise in solid and liquid propulsion systems runs deep, and these articles represent the hard work and accomplishments of our government and contractor teams. The Nerva and aerospike engines represent propulsion research and development that will eventually bring us the systems needed for in-space exploration." 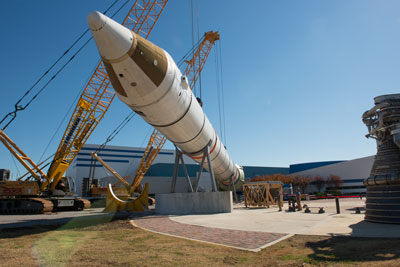 Four joined segments of the booster arrived at the Marshall Center by truck Sept. 19. Most recently, NASA used these solid rocket motor segments to test a new interior insulation that prevents the metal case from melting as the solid fuel burns. The new insulation is needed to replace obsolete materials, and it will be used for five-segment boosters being developed for the 70-metric-ton SLS vehicle scheduled to make its first flight in 2017. Firefighting companies are investigating the benefits of using the insulation in protective equipment. To complete the booster, a 12-foot-diameter, 6-ton aft skirt arrived at Marshall on Oct. 23 by a railhead revived to provide an additional method for transporting large hardware to and from Redstone Arsenal.

Image left: On Nov. 13, cranes lifted a solid rocket booster, with parts flown on more than 30 shuttle missions, into its final position in the Building 4205 propulsion park that can be visited by Marshall team members and visitors. (NASA/MSFC/Fred Deaton)


"Our Marshall center ops team was proud to help transport the aft skirt, assemble the booster components and complete construction of the booster display," said Steve Doering, director of Marshall's Office of Center Operations. "Many Marshall employees and visitors feel strong ties to the space shuttle, and now they can see real flight hardware that propelled the shuttle on numerous historic missions."

This solid rocket booster may be a static display now, but the various parts helped propel more than 30 shuttle flights including the first space shuttle mission, STS-1, servicing missions to the Hubble Space Telescope, and numerous Spacelab science missions.

McMahan is a public affairs officer in the Office of Strategic Analysis & Communications. 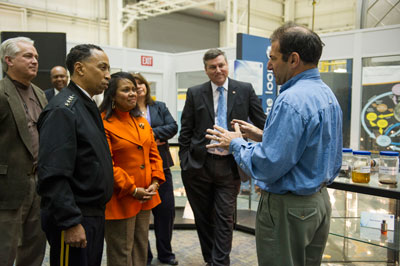 The U.S. Army Materiel Command's commanding general, Gen. Dennis Via, left, visits the North High Bay of Building 4755 on Nov. 15 during a tour of the Marshall Space Flight Center with his wife, Linda Via, second from left, and Center Director Patrick Scheuermann, second from right. Bob Bagdigian, right, branch chief of the Environmental Control and Life Support System, or ECLSS, Development Branch in Marshall's Engineering Directorate, discusses how ECLSS supports life onboard the International Space Station. To learn more about this system that was designed, constructed and tested by the Marshall Center, visit here. Via also visited the South High Bay to learn about welding technology for NASA's Space Launch System, and the Payload Operations Center in Building 4663 to glimpse the round-the-clock support provided to space station science. (NASA/MSFC/Emmett Given)


Tune in to NASA Technology Days Nov. 28-29 Via UStream

Employees will be able to watch the showcase via UStream. For details and the complete showcase agenda, visit the NASA Technology Days website.
› Back To Top