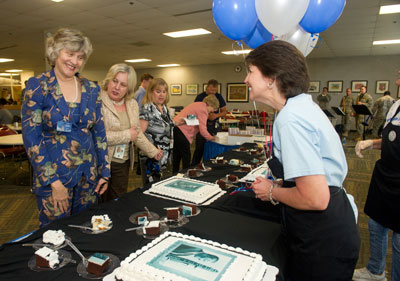 One hundred years ago, the father of modern rocketry and the Marshall Space Flight Center's first director -- Dr. Wernher von Braun -- was born March 23 in Wirsitz, Germany. One hundred years later, von Braun's family and friends gathered at Marshall to celebrate his centennial birthday with team members, remembering this innovative and remarkable man whose interest in space began as a young child. His daughter, Dr. Margrit von Braun, left, and Dr. Jan Davis, center, Marshall's first astronaut, admire the commemorative cakes at the center's celebration in the Building 4203 cafeteria. Serving the guests is Linda Gomez, right, an executive management assistant in the Office of the Director. (NASA/MSFC/Emmett Given) 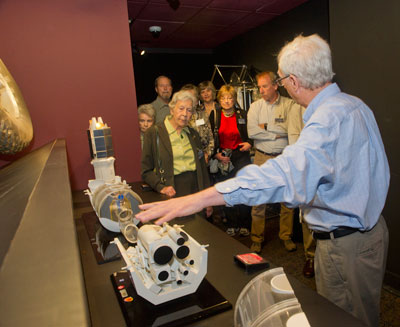 Marshall Historian Mike Wright, in the foreground, talks about Spacelab, the shuttle-based research laboratory that was managed by the Marshall Center, while giving a tour of the Heritage Gallery in Building 4200 for von Braun's family and friends. (NASA/MSFC/Emmett Given) 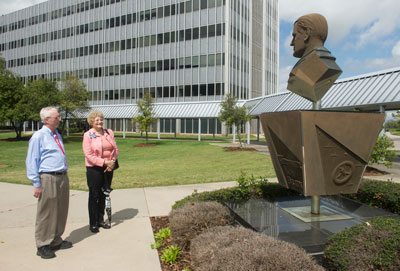 Von Braun's daughter, Iris Robbins, right, visits the statue of her father, located at Building 4203. Marshall Historian Mike Wright is at left. A public exhibit showcasing the life of von Braun, in honor of his birthday, is on display at the U.S. Space & Rocket Center. Titled "100 Years of Von Braun: His American Journey," it covers his American experience, beginning with his surrender to U.S. forces after World War II, and continuing through his death in 1977. To learn more about the display, visit here. (NASA/MSFC/Emmett Given) 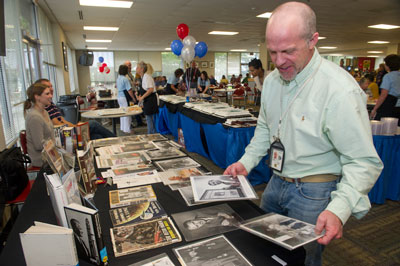 Chip Moore, a mechanical engineer of the Engineering Directorate, looks through pictures of von Braun. Exhibits and photo displays were set up in the Building 4203 cafeteria, recounting the historic work of von Braun and his team to launch the first American explorers into space and to the moon. To read more about the life of this rocket pioneer and his legacy, visit here.


Legacy of Pacific Braze Furnace Will Live On
By Sanda Martel 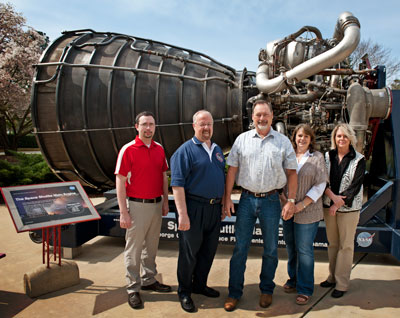 The Pacific Braze Furnace -- a giant machine that forged NASA space hardware for 46 years -- may soon be closed. Because of its historic role in preparing hardware for spaceflight, it is considered a national asset.


The unique furnace, located on a 56-acre tract of land at Pratt & Whitney Rocketdyne's Canoga Park facility in California, is the only one of its kind in North America and one of only two in the entire world. It weighs 6,000 pounds, measures 92 feet in diameter and almost 20 feet high.

The furnace brazed and heat-treated F-1 and J-2 engines for the Apollo Saturn V launch vehicle and each and every space shuttle main engine, or SSME, that flew during the 30-year Space Shuttle Program. It also was used to braze the J-2X engine beginning in 2007. J-2X is a redesigned J-2 engine that will power the upper stage of NASA's Space Launch System, or SLS, for exploration to new destinations in our solar system. Brazing is a means of joining metals with an alloy layer and heating it, in the case of SSMEs, to extremely high temperatures. This procedure sealed engine nozzles, thus preventing propellant leakage from the main fuel lines.

After 30 years and 135 shuttle missions, shuttle assets now are being safely and efficiently transitioned or retired. The final disposition of Marshall Space Flight Center shuttle assets is the responsibility of the Shuttle-Ares Transition Office, which began the process shortly after space shuttle Atlantis completed the last mission and rolled to a stop at the Kennedy Space Center in July.

SLS or another NASA organization has the first choice of using the furnace, Brunson said. If NASA doesn't choose to use it, the furnace could be obtained by another government agency, purchased by the contractor or demolished. The furnace's future may not be known for another six months.

"With SLS working to finalize its design, one of our challenges is to ensure we don't do anything with existing SSME strategic capabilities, proven processes and existing flight hardware that would adversely affect that program," said Brunson. “The Pacific Braze Facility falls into that category of assets -- as something that may be needed in the near future," he added. 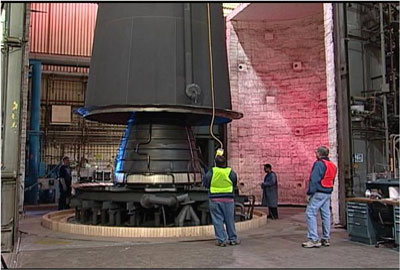 Another challenge for the Transition Office is to ensure that the SSME transition team completes its work by the end of September 2013, Brunson said.

"It was agreed by all consulting parties that a Historic American Building Survey/Historic American Engineering Record, or HABS/HAER Level I recordation, would be performed on the furnace,“ said McKinstry, noting that when completed, the deliverables will include interpretive drawings, a written history and large-format photos that will be placed in the Library of Congress in Washington. A recordation is a summary of historical facts.

McKinstry said a video was produced describing the furnace history and its operations. A historical marker will be provided to the State of California Historic Preservation Officer for placement at the site once the furnace is removed.

"The furnace's historic past will be documented for future generations, but just as importantly, it will allow the agency and its partners to continue the pioneering efforts required to write the next chapter in manned spaceflight and exploration," said McKinstry. 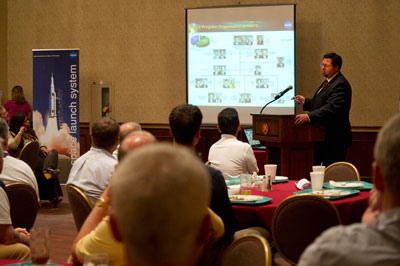 Todd May, Space Launch System, or SLS, program manager at the Marshall Space Flight Center, in opening remarks to the monthly meeting of Marshall Association on March 20, quoted American astronomer and author Carl Sagan: "Somewhere, something incredible is waiting to be known."

Image right: SLS Program Manager Todd May provides an update of the heavy-lift launch vehicle's development to members of the Marshall Association on March 20. (NASA/MSFC)


"As a nation we will not retreat from exploration. We want to move forward. We are an agency that does great things," said May, reminding attendees of the reason why NASA is investing in a national heavy-lift launch vehicle capability.

SLS is being designed for missions beyond Earth's orbit and will extend America's tradition of human spaceflight, as well as provide the capability to do entirely new science missions.

"The International Space Station is a stepping stone on the way, and SLS will give the nation a safe, affordable and sustainable means of reaching beyond our current limits and opening up new discoveries from the unique vantage point of space," added May.

Since the program was first announced in September, May said the SLS team has been making steady progress through programmatic gates. A System Requirements Review and System Definition Review -- extensive technical assessments and part of NASA's systems engineering life cycle for programs -- are under way.

"SLS moved out very quickly; the existing hardware is what allows us to get swiftly to the first flight by 2017," said May. The SLS initial configuration, with a 70-metric-ton lift capacity, will provide 10 percent more thrust than the Saturn V, which delivered humans to the moon.

"We have RS-25 engines from the Space Shuttle Program ready to go, and the largest and most powerful solid rocket motor well under way," said May, also mentioning that the J-2X engine is actively being tested at Stennis Space Center. RS-25 engines and five-segment solid rocket motors will provide the core propulsion for SLS and the J-2X engine is planned for use in the upper stage as the vehicle is evolved.

In addition to reaching out to the Marshall community at the employee association meeting, May and SLS Program Deputy Manager Jody Singer and other team members have been sharing information about the SLS Program structure, tenants, goals and priorities during "road shows.”

Asked about the biggest challenge ahead, May acknowledged the fiscal constraints presented to a phased development program the size and scope of SLS will be the largest issue. With an overarching focus on affordability, SLS is organized as a lean enterprise with a smaller staff and streamlined systems engineering and integration function, May said.

"People come to work for NASA because they are committed to exploration. There's nothing easy about this enterprise, but the team is excited and committed to the mission. It doesn't take much for me to be excited about something as enduring as America's commitment to explore."

The Face of Mission Success at Marshall Is: Sandra Turner 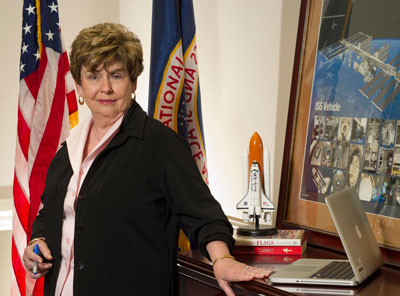 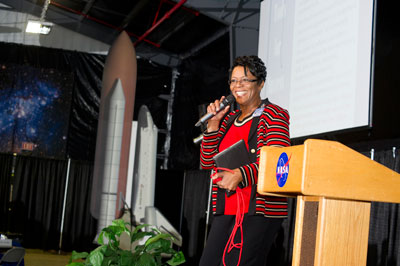 Dr. Amanda Harris Goodson, a former Marshall Space Flight Center employee who is now director for enterprise process integration at Raytheon Missile Systems for Information Technology in Tucson, Ariz., speaks about important tools for success at the 2012 Women's History Month Seminar on March 22. Goodson also is president of Never the Same Ministries, a nonprofit organization that sponsors women's conferences and training. The event, attended by more than 200 participants in Activities Building 4316, offered a variety of activities, including a "dress for success" fashion show. Other speakers included Renasant Bank President Linda Green, who presented the keynote address on the importance of women's education and empowerment. Local psychologist Dr. Halina Hale discussed stress-coping strategies, and Detective Christie Gover of the Madison Police Department demonstrated self-defense techniques. Women's History Month, celebrated annually in March, highlights the contributions of women to events in history and contemporary society. (NASA/Marshall/Emmett Given)

NASA's first space shuttle mission lifted off from the Kennedy Space Center on April 12, 1981, when the orbiter Columbia, carrying crew members John Young and Robert Crippen, rocketed into space. This was the first manned space mission of a launch vehicle that had not previously been flown unmanned, and its successful flight was a momentous achievement.

The flight was the culmination of many years --1970-1981 -- of design, development and testing of the propulsion elements of the space shuttle. Leading this effort were three Marshall Space Flight Center project managers: James R. Thompson of the Space Shuttle Main Engine Office, George Hardy of the Solid Rocket Booster Project and Jim Odom of the External Tank Office.

On April 17 at 5:30 p.m., the Marshall Retirees Association, in partnership with the U.S. Space & Rocket Center, will present these managers in a panel discussion of their views of the challenges and issues of managing in the post-Apollo era. The event will be in the 3-D theater at the Davidson Center for Space Exploration. This is part of the "Pass the Torch" series of panels hosted by the Space & Rocket Center. There is no admission charge.

For more information, contact Linda Posey, president of the Marshall Retiree Association, at 544-0118. 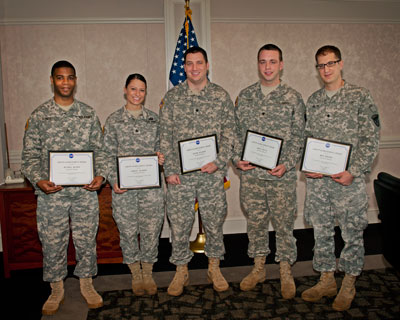 These seven soldiers filled the lunch hours in the Building 4203 cafeteria with a joyful noise during the holiday season. With a big thanks for their festive spirit, the Marshall Space Flight Center presented a Group Achievement Award to members of the U.S. Army Materiel Command Band on March 19 at a center staff meeting. Marshall's Dale Thomas, associate center director (technical), gave the award to, from left, Russell Bundy, Ashley Allison, Peter Allison, Josh Couts and Ben Melvin. Not pictured are Elmer Castillo and Cary MacCartney. Led by Chief Warrant Officer Peter Gillies, the Army band has 40 members and performs 25-30 times a month. For more information and to view their performance schedule, visit http://bands.army.mil/bands/aa/default.asp?unitname=389AB. (NASA/MSFC/Ray Downward)

Thomas L. McCrickard Jr., 85, of Huntsville died March 7. He retired from the Marshall Center in 1990 as an aerospace engineer. He is survived by his wife, Virginia Atkins McCrickard.

Brice R. Alsup Sr., 88, of Madison died March 9. He retired from the Marshall Center in 1974 as a technical management engineer.

William O. Harrison, 84, of Elkmont died March 10. He retired from the Marshall Center in 1986 as an aerospace engineer supervisor.

Thomas Tines, 90, of Gurley died March 22. He retired from the Marshall Center in 1974 as an aerospace engineering technician.
› Back To Top