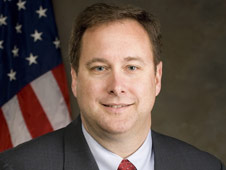 Robert Lightfoot. (NASA/MSFC) Since 2004, the NASA family takes time on the last Thursday in January to remember the astronauts who died serving our nation's space exploration program.

A total of 21 U.S. astronauts and one Israeli astronaut have died in in-flight accidents or in training. Another seven space travelers have died in the line of duty.

The reality is that the pressures, temperatures, masses, velocities, environments and other factors associated with space flight make it inherently risky. Part of our job here is to make it as safe as we can. Typically, the riskiest phases are launch and landing, but the 11 U.S. and international accidents during training -- including the Apollo 1 fire -- show that fatalities can occur any time. I want to emphasize that safety is no less urgent now because the Shuttle is retired.

Flight safety remains an issue today as we design the new Space Launch System. It's an issue as we make sure the environmental control and life support systems, as well as the science and laboratory hardware and processes on the International Space Station are reliable and safe. It's an issue as we support the new players in commercial space flight through our facilities and our expertise.

NASA's Day of Remembrance is timed to coincide with the Apollo 1 fire, Jan. 27, 1967, the Challenger accident, Jan. 28, 1986, and the Columbia accident, Feb.1, 2003. We should remember those events and the causes. But we should also remember those astronauts, how they lived, and the legacy they leave us.

All across the country and in different ways, these heroes are memorialized. Their names are inscribed in granite at the Astronaut Memorial at Kennedy Space Center. Their spirit and aspirations are remembered through the Challenger Centers for Space Science Education and in countless classrooms. They continue to inspire people all across the country.

This Thursday, I will place a wreath on their pictures in the lobby of Building 4200. I invite you to visit it and think about how we will memorialize these brave colleagues and friends. I believe it should be in the work we do and how we live our lives. As Abraham Lincoln said in his Gettysburg Address, "It is for us, the living… that we here highly resolve that these dead shall not have died in vain." The memory of these explorers should urge us forward, to explore, to never give up, and to ask ourselves, "Have we given our best?"

Every day, with each new challenge we overcome and every discovery we make, we honor these remarkable men and women. Please join me in working to fulfill their dreams for the future.


Day of Remembrance Ceremony to be Held Jan. 26 in Building 4200 Lobby

Each January, NASA honors the Apollo 1, Challenger and Columbia crew members, and others who lost their lives supporting NASA’s mission. In recognition of this special Day of Remembrance, Marshall Space Flight Center Director Robert Lightfoot invites all Marshall civil servants and contractors to join him for a ceremony from 9-9:15 a.m., Jan. 26, in the Building 4200 lobby.

Lightfoot will provide remarks and place a memorial wreath in front of the framed photos of the fallen astronauts. Candles will be lit by Associate Director Robin Henderson and a moment of silence will be observed.

The event will air on centerwide and desktop TV.

Read the Director's Corner in this week's Star as Lightfoot remembers those whose lives were lost and how safety is a priority as we continue NASA's mission. 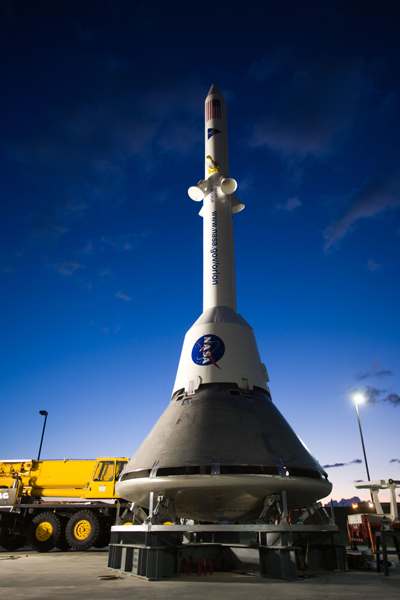 NASA will showcase a full-scale test version of the Orion spacecraft at the U.S. Space & Rocket Center Feb. 1-5.

Image left: Ground teams in White Sands, N.M., practice stacking test versions of Orion crew module and its launch abort system in 2010. The Orion crew module will make a tour stop at the U.S. Space & Rocket Center in Huntsville Feb. 1-5 on its way to the Kennedy Space Center for additional testing. (NASA)


The crew module is being used to test and develop the Orion spacecraft that will take the next generation of astronauts beyond low-Earth orbit. The crew module is on its way to Kennedy Space Center following testing in New Mexico. It was originally used by ground crews in advance of the launch abort system flight test that took place at White Sands, N.M., in 2010.

Museum visitors will be able to see the Orion hardware up close and sign a piece of the actual flight hardware. Visitors can learn more about America’s future deep-space exploration vehicles from team members from the Orion Program including the Launch Abort System Project -- the system used to pull the crew to safety in the event of emergency that is led jointly by Langley Research Center and the Marshall Space Flight Center -- and the Space Launch System Program. Models of the SLS and crew module Launch Abort System will be on view.

In addition, on Feb. 2 at 6 p.m. Mark Kirasich, Orion deputy program manager, and Todd May, SLS program manager, will share details of NASA's new exploration mission as part of the "Pass the Torch" lecture series. The lecture will be held at the 3D Theatre in the Davidson Center. Marshall team members are invited to attend. 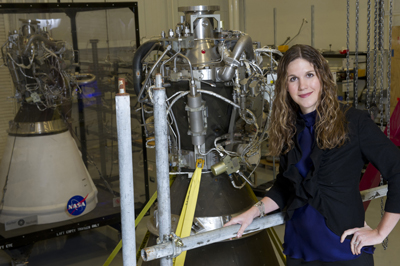 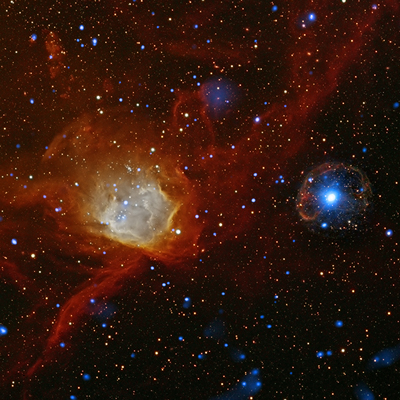 A new image from an assembly of telescopes has revealed an unusual cosmic ornament. Data from NASA's Chandra X-ray Observatory and the European Space Agency's XMM-Newton have been combined to discover a young pulsar in the remains of a supernova located in the Small Magellanic Cloud, or SMC. This would be the first definite time a pulsar -- a spinning, ultra-dense star -- has been found in a supernova remnant in the SMC, a small satellite galaxy to the Milky Way. In this composite image, shown at left, X-rays from Chandra and XMM-Newton have been colored blue and optical data from the Cerro Tololo Inter-American Observatory in Chile are colored red and green. The pulsar, known as SXP 1062, is the bright white source located on the right side of the image in the middle of the diffuse blue emission inside a red shell. The diffuse X-rays and optical shell are both evidence for a supernova remnant surrounding the pulsar. The optical data also displays spectacular formations of gas and dust in a star-forming region on the left side of the image. A comparison of the Chandra image with optical images shows that the pulsar has a hot, massive companion. Astronomers are interested in SXP 1062 because the Chandra and XMM-Newton data show that it is rotating unusually slowly -- about once every 18 minutes. (In contrast, some pulsars are found to revolve multiple times per second, including most newly born pulsars.) This relatively leisurely pace of SXP 1062 makes it one of the slowest rotating X-ray pulsars in the SMC. Two different teams of scientists have estimated that the supernova remnant around SXP 1062 is between 10,000 and 40,000 years old, as it appears in the image. This means that the pulsar is very young, from an astronomical perspective, since it was presumably formed in the same explosion that produced the supernova remnant. Therefore, assuming that it was born with rapid spin, it is a mystery why SXP 1062 has been able to slow down by so much, so quickly. Work has already begun on theoretical models to understand the evolution of this unusual object. (NASA/CXC/Univ. of Potsdam/L. Oskinova et al.) 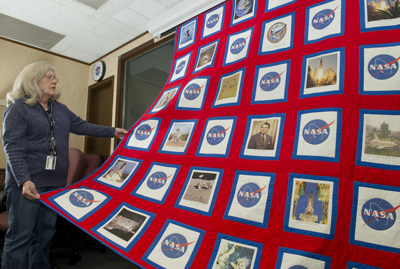 When Norma Bolander retired from the Marshall Space Flight Center on Dec. 31, she took with her the memories of her career stitched together into a king-size quilt with 18 photos and 18 NASA logos. The quilt was made by Ermadine Ralph, the mother of Carol Reed, an executive support assistant in the Office of the Chief Information Officer, and was presented to Bolander on Dec. 27. Reed, right, admires the quilt that includes pictures of the center's first director, Dr. Wernher von Braun; the Apollo 11 footprint on the lunar surface; the lunar roving vehicle; the historic Redstone Test Stand; each space shuttle; shuttle Enterprise at Building 4200; and the STS-106 patch representing Bolander’s selection as a Space Flight Honoree during that mission in 2000. Bolander, a former management support analyst in the Office of the Chief Information Officer, started her civil service career at Marshall in 1965, and worked at several federal agencies before returning to Marshall in 1994, remaining until her retirement. (NASA/MSFC/Emmett Given)

Mark your calendar for Jan. 29. Space Camp at the U.S. Space & Rocket Center will be featured in a heart-warming Hallmark Hall of Fame movie, A Smile as Big as the Moon, that will air on ABC at 8 p.m. CST.

The movie is based on a true story about the first special needs students who attended Space Camp in 1988. Mike Kersjes, a Grand Rapids, Mich., high school football coach and special education teacher, helped his students achieve their impossible dream of attending Space Camp at a time when the camp accepted mainly gifted students.

In order to get his students into the camp program, Kersjes contacted Dr. Deborah Barnhart, who at that time was the director of Space Camp and is the current Space & Rocket Center's chief executive officer.

The cast and crew were at the Space & Rocket Center this fall to film many of the segments.

Kersjes is played by John Corbett who is best known for his roles in Northern Exposure, My Big Fat Greek Wedding, and Sex & the City. Kersjes is aided in his mission by another teacher, Robynn McKinney, who is played by Jessy Schram, known for her work in Without a Trace, Unstoppable and Once Upon A Time. Deborah Barnhart is played by Cynthia Watros, who has appeared on The Drew Carey Show, House and Lost.

In this presentation, several of the students are played by young actors who actually cope with the same disabilities on a daily basis. Everything from Down syndrome to autism to dyslexia is portrayed in the movie.

Several ABC stations throughout the country will be presenting stories on Space Camp alumni who live in their market areas as part of local promotion for the movie.