Robert Lightfoot, Marshall Center Director (NASA/MSFC) A lot of history has been discussed in the conference room atop Building 4200. That was the case on June 17 when we held the last Center Director's Flight Readiness Review, or FRR, for the STS-135 Space Shuttle mission.

This meeting is where the shuttle propulsion and payloads teams brief me on preparations for the upcoming mission. Representatives present the mission overview, crew, mission profile, launch window, countdown, mission timeline, payload bay configuration, and payloads. Whenever the shuttle goes to the International Space Station, there's also a summary of science activity and issues onboard. It always follows reviews at the organization level, and after it come higher-level FRRs before we commit the shuttle and its crew to launch.

To participate in these meetings is to understand the incredible dedication, knowledge, and operational experience the Marshall team embodies. I'm incredibly proud and humbled to represent these amazing people every time I go to Kennedy Space Center for FRR and launch. The shuttle flies because of the Marshall team.

I thought about what I should say on the occasion of such an important milestone. There's much I could have said, but it's not yet time. What I told them instead -- and what I want to emphasize to everyone who supports the shuttle program -- was this:

Let's keep a boresight focus on the mission. It's our job to get the shuttle and its payloads ready to fly. There are a lot of reasons to be distracted. Emotions will be running high. The interest from the public and the media will be intense. But we have a job to do, and it is safely flying Atlantis and bringing her home one final time. There will be opportunities after the last "wheels stop" call from Mission Control to reflect and celebrate the program, the history, and the lives of the people we have all been fortunate enough to be a part of.

So let's stay focused, fly safe, and finish strong. Thanks for the work you've done and continue to do to open space to future generations of explorers. 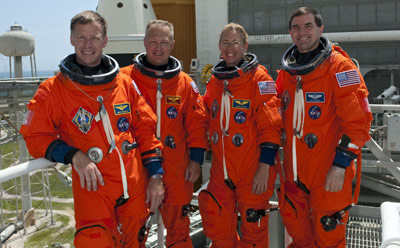 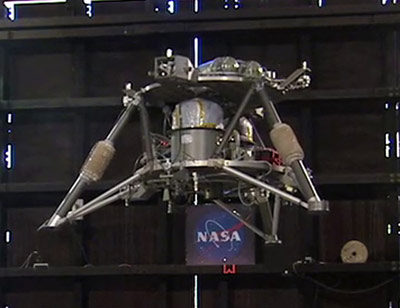 On June 16, NASA's Robotic Lander Development Project at the Marshall Space Flight Center conducted the second free-flight test of a robotic lander prototype. During the test, the lander successfully executed its planned flight profile, autonomously ascending to a 6-foot hover and descending to conduct a controlled soft landing.


The lander, loaded with 220 pounds of hydrogen peroxide propellant, operated on two sensors -- the inertial measurement unit, which tracks the lander's accelerations and the direction it's pointed, and the radar altimeter, which measures its altitude. With each test flight, the lander is more stabilized flying longer and demonstrating its control algorithms can maintain a stable attitude and execute a soft landing using the system's pulsing thrusters.

This test series will illustrate the lander team's ability to control the vehicle using pulsed, not throttled, thrusters. One of the key technologies planned for use in the final flight lander design is a set of small, powerful, pulsed thrusters developed for the Divert Attitude Control System (DACS) by the Missile Defense Agency of the U.S. Department of Defense.

The prototype also provides a platform to develop and test sensors, avionics, software, landing legs and integrated system elements to support autonomous landings on airless planetary bodies in the solar system, where aero-braking and parachutes are not options.

These tests will aid in the design and development of a new generation of small, smart, versatile robotic landers capable of performing science and exploration research at multiple destinations in the solar system.

More free-flight tests are planned that could potentially take the lander up to 100 feet and last up to 60 seconds.

Development and integration of the lander prototype is a cooperative endeavor led by the Robotic Lunar Lander Development Project at the Marshall Center; Johns Hopkins Applied Physics Laboratory in Laurel, Md.; and the Von Braun Center for Science and Innovation -- which includes the Science Applications International Corp., Dynetics Corp., Teledyne Brown Engineering Inc. and Millennium Engineering and Integration Company, all of Huntsville.

The project is partnered with the U.S. Army's Test and Evaluation Command's test center located at Redstone Arsenal. Redstone Test Center is one of six centers under the U.S. Army Test and Evaluation Command and has been a leading test facility for defense systems since the 1950s. Using an historic test site at the arsenal, the project is leveraging the Redstone Test Center's advanced capability for propulsion testing.

To watch video of the lander test, click here.

Newton is a public affairs officer in the Office of Strategic Analysis and Communications. 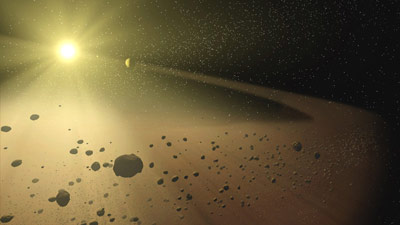 On the evening of July 3 at 10:05:30 p.m. CDT, an asteroid will eclipse a star's light for 17.9 seconds in a process known as occultation. A wide viewing path will offer an opportunity to view the asteroid passing in front of the star -- TYC 0292-00339-1 in the constellation Virgo.


The occultation will occur at a distance of 280 million miles into space that will pose no threat to Earth.

Here on Earth, astronomers can measure the exact length of time the star's light is blocked and use those calculations to help verify the size of 52 Europa -- and you can help with the observation! 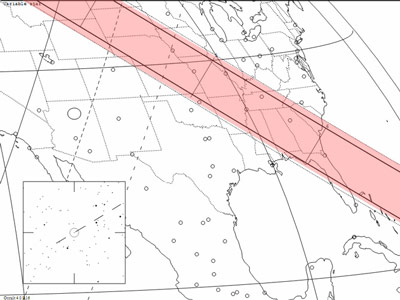 Dr. Bill Cooke and his team from NASA's Meteor Environment Office at the Marshall Space Flight Center will be watching the sky that evening. Join them from 8:30 p.m. to 11 p.m. CDT for a live Web chat to ask questions and observe the occultation via a live Ustream feed. Amateur astronomers who are observing the event can also report their observations via the associated Twitter feed.

Image right: This map shows the path of occultation. This event will not be viewable with the naked eye, but you can see it through your telescope -- or visit here on July 3, starting at 8 p.m. CDT, for a Ustream view of the occultation. (International Occultation Timing Association)

For observers, a wide path of viewing opportunity is available from Florida through Montana and into Canada. The viewing path will be those areas of the country that fall between the two dark, diagonal lines on the adjacent map. The combined light of the asteroid and the star will drop by 2.1 mag to 12.1 mag -- the magnitude of the asteroid -- for at most 17.9 seconds. For more information on asteroid occultation and 52 Europa, visit here.

Visit http://www.nasa.gov/connect/chat/europa_chat.html to join the chat July 3. See you in chat! 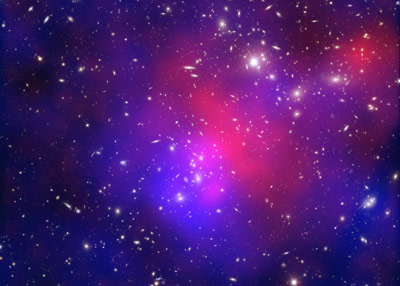 One of the most complicated and dramatic collisions between galaxy clusters ever seen is captured in this new composite image. This collision site, known officially as Abell 2744, has been dubbed "Pandora's Cluster" because of the wide variety of different structures seen. Data from NASA's Chandra X-ray Observatory are colored red, showing gas with temperatures of millions of degrees. In blue is a map showing the total mass concentration -- mostly dark matter -- based on data from the Hubble Space Telescope, the European Southern Observatory's Very Large Telescope and the Japanese Subaru telescope. Optical data from Hubble and the Very Large Telescope show the constituent galaxies of the clusters in red, green and blue.

Galaxy clusters are the largest gravitationally bound objects in the universe and have become powerful tools in cosmology studies. Further studies of Abell 2744 may provide a deeper understanding of the way that these important objects grow and provide new insight into the properties of dark matter.

Odie Lee Pressnell, 88, of Athens died April 13. He retired from the Marshall Center in 1979 as a rigging worker. He is survived by his wife, Mildred Magdalene Pressnell.

Underwood "Woody" Williams, 89, of Brownsboro died June 10. He retired from the Marshall Center in 1974 as an engineering technician.

David William Allen, 81, of Huntsville died June 15. He retired from the Marshall Center in 1999 as a computer engineer. He is survived by his wife.

Harold Ray Lowery, 95, of Meridianville died June 20. He retired from the Marshall Center in 1980 as a flight systems engineer. He is survived by his wife Mary Ann Lowery.

William "Jack" Franklin, 89, of Huntsville died June 21. He retired from the Marshall Center in 1979 as an experimental manufacturing techniques engineer. He is survived by his wife Reba McAlexander Franklin.