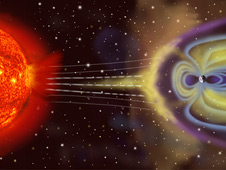 This artist concept shows the interaction between the sun and Earth's magnetosphere. The magnetosphere deflects most solar and cosmic radiation, but lets more in at the poles. Credit: NASA

If NASA's Chris Mertens has his way, weather forecasts and airplane cockpits of the future will include measurements of hazardous radiation in the atmosphere.

Mertens, a senior scientist at NASA's Langley Research Center in Hampton, Va., is developing a system to predict radiation entering Earth's atmosphere from space. The goal is to provide high-flying commercial airline passengers and crew with real-time information about the radiation they will be exposed to in flight.

"Aviation occupational radiation exposure currently is not monitored, measured and quantified," says Mertens. "This will be the first model of its type to do that."

Exposure to radiation has been shown to increase health risk, according to numerous studies. Space radiation on the ground is very low, but increases significantly with altitude. At 30,000 to 40,000 feet, the typical altitude of a jetliner, exposure on a typical flight is still considered safe – less than a chest X-ray.

Exposure is considerably higher, however, over the Earth's poles, where the planet's magnetic field no longer provides any shielding. And with a thousand-fold rise in commercial airline flights over the North Pole in the last 10 years, exposure to radiation has become a serious concern. 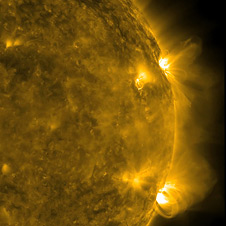 The new solar cycle is ramping up. This image from NASA's Solar Dynamics Observatory shows the sun emitting its first X-class flare in more than four years Feb. 14, 2011. X-class flares are the most powerful of all solar events and can trigger radio blackouts and long-lasting radiation storms. This particular flare comes on the heels of a several other recent flares. Credit: NASA/Goddard Space Flight Center

Radiation constantly bombards the Earth, from the sun and in the form of cosmic background radiation from the universe at large. A magnetic field originating deep within the planet surrounds the Earth, deflecting much of the radiation. At the poles, however, radiation has an opening to the planet's atmosphere. People on the ground are safe from this radiation, but are subject to more hazardous levels at the altitude where jets fly.

A study by Mertens of polar flights during a solar storm in 2003 showed that passengers received about 12 percent of the annual radiation limit recommended by the International Committee on Radiological Protection. The exposures were greater than on typical flights at lower latitudes, and confirmed concerns about commercial flights using polar routes.

While the flights studied appear to have not put passengers in danger of exceeding the safe radiation limit on an individual flight, concerns remain, Mertens said. Many workers whose jobs expose them to consistent radiation sources log that exposure to keep a record over one's career. This is not the case for commercial aircrew, which receive the highest radiation levels of any occupationally exposed group.

People who work on commercial airline flights are technically listed as "radiation workers" by the federal government – a classification that includes nuclear plant workers and X-ray technicians. But unlike some others in that category, flight crews do not quantify the radiation they are exposed to. 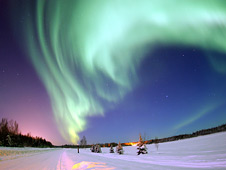 Airlines save huge amounts of fuel by flying "over the top" routes because they are the shortest way between certain points, such as North America and Asia. Not only are they shorter, they pass through weaker headwinds, saving even more fuel.

Since 1999, the number of flights over the North Pole from the U.S. has risen from around a handful of demo flights to more than 5,000 a year and growing.

While one or two flights will not exposure passengers and crew to lethal doses of radiation, multiple flights definitely pose an additional health risk, Mertens says.

"The average commercial airline pilot receives more radiation exposure than a fuel-cycle worker in a nuclear power plant," he says.

Prediction will be especially critical during solar events that cause large spikes in the amount of radiation entering through the poles. The recommended annual limit can be exceeded in just one high-latitude flight.

"That's the sort of Holy Grail of space weather, to predict these events," Mertens said, "but right now it's not there."

Being able to measure, monitor, and predict that exposure with precision and real-time immediacy is the primary goal of Merten's Nowcast of Atmospheric Ionizing Radiation for Aviation Safety (NAIRAS) project.

Toward that end, Mertens and his colleagues are collaborating with the National Oceanic and Atmospheric Administration (NOAA) and the National Institute of Occupational Safety and Health (NIOSH).

"They're the only provider of space weather prediction services, so they're really interested in this," said Mertens.

A prototype is already online at Cosmic Radiation Monitor.


Earth's drifting magnetic poles are another cause for concern. Contrary to popular belief, magnetic north is not at the North Pole - that's true north. Currently, magnetic north is hundreds of miles south, in the Canadian Arctic, moving toward Siberia at about 40 miles per year.

If magnetic north winds up in an area with lots of air traffic, health risks due to radiation exposure will be significantly higher, and likely will require additional monitoring of flight schedules to keep individual exposure within recommended limits.

Finally, says Mertens, we are emerging from a period of low solar activity, and as solar activity increases - and it recently has – the probability for high level solar radiation storms will rise.