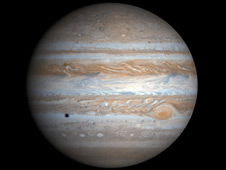 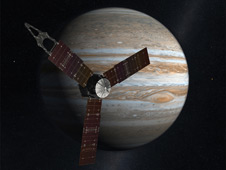 Like a spotlight illuminating a scene, the Sun will shine on Jupiter with such brilliance December 2 that it will appear brighter in the night sky than it has all year.

Jupiter's configuration will place it directly opposite the Sun in our sky, an annual event known as "opposition."

The solar system's largest planet will rise in the east at sunset, look its most luminous around midnight, and set as the Sun rises. It will gleam brighter than any point of light in the sky.

Observers in the Northern Hemisphere can expect an especially shiny show because Jupiter will be high in the sky around midnight locally. That means the planet’s light won’t be blocked as much by Earth's atmosphere as it would closer to the horizon.

More than 1,000 Earths could fit inside Jupiter, and all of the other planets together make up only about 70 percent of its volume.

The gas giant is the fifth planet from the Sun and 1/1,000th its mass. Jupiter orbits the Sun every 12 years and rotates every 10 hours, making it the fastest-spinning planet in the solar system.

NASA's most recent mission to Jupiter is Juno, whose main scientific goal is to better understand the formation, evolution and structure of the planet and the early formation of the solar system.

Launched in August 2011, the solar-powered spacecraft is expected to arrive at Jupiter in July of 2016 and begin orbiting the planet.