Scientists Studying Wintry Ice in Summer Clouds
Winter is here, snow is falling in many areas of the country, and some of us are already wishing for the return of hot summer days. But, would you believe that even on the hottest summer day the temperature inside some clouds remains icy and winter-like, producing temperature readings as cold as negative 70 degrees Celsius (negative 94 degrees Fahrenheit)? Would you also believe that the ice crystals that form at the top of big summertime clouds may help scientists predict next winter's snowstorm? 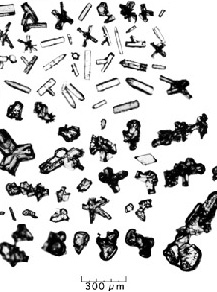 Image right: Seen here is a profile of ice crystals, showing the diversity of their shapes. The larger crystals toward the bottom of the image occur at warmer temperatures (approximately -37 degrees Celsius, or -34.6 Fahrenheit), while the smaller images at the top occur at colder temperatures (approximately -49 Celsius, or -52.6 Fahrenheit). At nearly 150 micrometers wide, some of the largest ice crystals in this image are about as thick as three strands of human hair. Image credit: Andrew Heymsfield

Last month, scientists from NASA's Langley Research Center in Hampton, Va. and Goddard Space Flight Center in Greenbelt, Md. published a paper in the Journal of Geophysical Research on the importance of classifying ice crystals within the big summertime clouds, or convective cloud systems, as observed during a Florida-based research campaign. In their paper, the scientists showed that their instruments can identify the ice crystals and now they can begin to classify the crystals. By learning to classify the ice crystals in clouds, these scientists hope to contribute to improving weather and climate models, the complex computer programs used to show future atmospheric conditions.

Weather and climate computer models are complex because they must account for hundreds of variables, including many that seem completely unpredictable. Vincent Noel, a research scientist with Analytical Services and Materials at NASA Langley and the author of the journal article, explains, "Usually climate prediction means predicting the evolution of temperature, pressure, relative humidity, and plenty of other variables, over small (a few days) and large (a few centuries) timeframes. However, to predict all this stuff with enough accuracy, we need to take into account clouds -- and for the time being, clouds are the most important source of uncertainty in climate prediction."

Recognizing that clouds represent so much scientific uncertainty, some NASA scientists and other researchers decided to study tropical convective clouds in Florida, a type of large cloud system very common in that area. Their research project, called CRYSTAL-FACE (Cirrus Regional Study of Tropical Anvils and Cirrus Layers-Florida Area Cirrus Experiment), took place in the summer of 2002 throughout the state of Florida and the Gulf of Mexico, with the immediate goal of studying all aspects of the unique convection cloud formations from aircraft, land and satellite-based instruments. 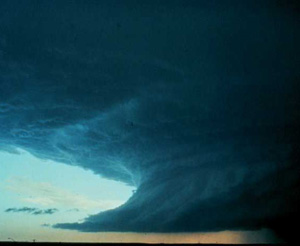 Image left: Known to interrupt hot summer afternoons with almost daily thunderstorms, convective cloud systems are very common in Florida. This image shows the unique shape of these systems, often called an "anvil" because of their potential to grow quite wide at the top and bottom, remaining narrow in the middle. Image credit: NOAA

If you have spent a day at Disney World in Orlando, or if you have relaxed on the beaches of South Florida, you have likely seen convective or heat-generated clouds. These clouds form when the Sun's rays warm the ground, causing hot air to rise, and condense into clouds. They are unique because they are massive in size, at times ranging from 100 to 200 km wide (62 to 124 miles); they form and dissipate very quickly, in as little as two hours; and they can be extremely thick, reaching 15 km (9.3 miles) in height, which is 6 km (3.7 miles) taller than Mt. Everest.

At the top of the convective clouds are cirrus clouds made of ice crystals. These crystals effect weather and climate in two ways: first, depending on the ice crystal's shape, it affects the amount of Sun's energy reflected or trapped near Earth's surface; and second, in their relationship with ozone destruction in the upper atmosphere (stratosphere).

"Because of all this solar radiation, the Earth gets hot," said Noel. "When any body is hot, it radiates infrared light." Infrared is light at one end of the spectrum, and people use infrared goggles to see things in the dark (which is how you can see people in the dark using infrared goggles). "Clouds trap this infrared radiation, absorb it, and re-emit it later; this is called the greenhouse effect." Clouds, specifically cirrus clouds, are the reason that a lot of infrared radiation stays near Earth instead of going into space. 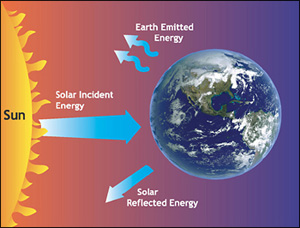 Image right: Clouds, particularly the high thin cirrus clouds, play a major role in the balance of (reflecting and absorbing) solar energy between the Earth and space. Scientists are trying to find out more about the ice crystals within the cirrus clouds and what role they play in this balance. Image credit: NASA

Because of their high altitude, ice clouds touch the tropopause, the region between the troposphere (the atmospheric layer closest to Earth) and the stratosphere. When the rising air on a summer day is hot enough, it can move fast enough where it "punches through" the tropopause and into the stratosphere. This "overshooting cloud top" brings water vapor into that layer of the upper atmosphere, where it contributes to destroying the "good ozone" that protects us from the Sun's harmful ultraviolet (UV) radiation.

Then the ozone reacts with the UV radiation, and creates oxygen again. This cycle results in less UV radiation getting to Earth. Unfortunately, water can also react with ozone, thus destroying the ozone faster than it is created. "So, if there's too much stratospheric water, the creation/destruction cycle of ozone is affected," said Noel.

The size, shape and composition of the ice crystals may reveal a lot about their effects on these atmospheric processes. "The ice crystal shapes are infinite and varied. We don't know which shapes are dominant, a problem when trying to predict climate change because the shape influences the quantity of sunlight reflected back into space," said Noel.

Image left: During the CRYSTAL-FACE field campaign, scientists collected samples of ice crystals like this one. The three circles define three different types of crystals, showing that within one cloud there can be many distinctly different shapes and sizes of crystals. Image credit: Paul Lawson, CRYSTAL-FACE

The scientists used short pulses of laser light known as Lidar, to classify ice crystals. They compared Lidar measurements from high-flying aircraft (up to approximately 20 km, or 12.4 miles) with measurements from other instruments. In the future, they hope to use satellite data to get the information, instead of flying airplanes.

One upcoming long-term study that will use a space-based instrument is the CALIPSO satellite mission (Cloud-Aerosol Lidar and Infrared Pathfinder Satellite Observations). CALIPSO is scheduled to be launched in June 2005, and will give us new, never-before-seen 3-D perspectives of how clouds and aerosols form, evolve and affect Earth's weather, climate and air quality.

+ The JGR Article in .pdf Format