The CloudSat spacecraft arrived at Vandenberg from Ball Aerospace & Technologies Corp., Boulder, Colo., on May 2. Following final tests, it will be integrated onto a Boeing Delta II launch vehicle, sharing its ride into orbit later this year with another NASA spacecraft, the Cloud-Aerosol Lidar and Infrared Pathfinder Satellite Observation, or Calipso. 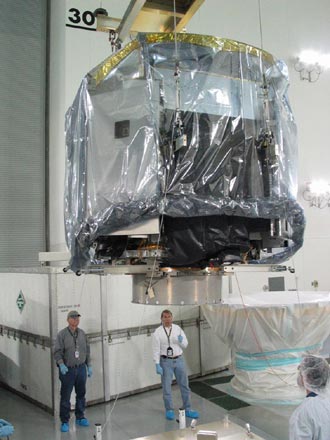 CloudSat and Calipso will give us new, 3-D perspectives on Earth's clouds and aerosols that will answer questions about how they form, evolve and affect our weather, climate, water supply and air quality.

CloudSat and Calipso employ revolutionary measurement technologies that will probe Earth's atmosphere as never before. Each spacecraft transmits pulses of electromagnetic energy and measures the portion scattered back to the instruments. CloudSat's Cloud Profiling Radar is more than 1,000 times more sensitive than typical weather radar. Calipso's polarization lidar instrument can tell the difference between ice and water in clouds, and between liquid and solid aerosol particles. By distinguishing aerosols from ice particles based on combined Calipso and CloudSat data, we will gain new insight into dynamics and properties of clouds and their influence on Earth's radiation balance.

The satellites will be launched into a 705-kilometer (438-mile) circular, Sun-synchronous polar orbit, where they will fly just 15 seconds apart as part of NASA's “A-Train” constellation of three other Earth Observing System satellites.

The usefulness of data from CloudSat, Calipso and the other satellites of the A-train will be much greater when combined. The data will help scientists better understand how sources of local pollution affect air quality, and will improve weather forecasting and climate prediction.

The other three Earth Observing System satellites that make up NASA's A-Train are: NASA's Aqua spacecraft; NASA's Aura spacecraft; and the French Space Agency's (Centre National d'Etudes Spatiales) Polarization and Anisotropy of Reflectances for Atmospheric Sciences coupled with Observations from a Lidar, or Parasol, spacecraft.

For more information on CloudSat and Calipso on the Internet, please visit: