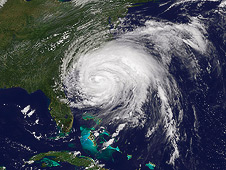 Climate change is leading to a greater number of high-intensity hurricanes. This is Hurricane Irene on Aug. 27, 2011, after making landfall at Cape Lookout, N.C. Credit: NASA/NOAA GOES Project

Temperatures, rainfall, droughts, high-intensity hurricanes and severe flooding events all are increasing and projected to continue as the world's climate warms, according to the National Climate Assessment.

"We are now geo-engineering the planet whether we want to or not," said Bruce Wielicki, a senior scientist at NASA Langley Research Center in Hampton, Va. "The rest of humanity's history will involve climate change and climate control."

Wielicki was one of three panelists at a Sierra Club press conference Jan. 15 to discuss the 1,000-page National Climate Assessment for 2012.

The report was presented last Friday to the U.S. Global Change Research Program (USGCRP). By law, the group conducts a national assessment every four years for Congress and the president. The USGCRP is comprised of 13 federal agencies, including NASA. Business leaders, the public and non-governmental organizations also contribute. 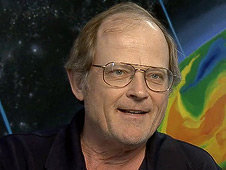 Wielicki said the climate change forecast for 2100 using the "business as usual" emissions scenario includes a nine-degree hike in Virginia temperatures. "We literally would be even hotter than Houston is right now," he said at the press conference. Wielicki specializes in atmospheric science.

"One more year of numbers isn't in itself significant," said Gavin Schmidt, a climatologist at the New York-based Goddard Institute for Space Studies, which conducted the temperatures study.

"What matters is this decade is warmer than the last decade, and that decade was warmer than the decade before. The planet is warming. The reason it's warming is because we are pumping increasing amounts of carbon dioxide into the atmosphere."

Among the key findings of the National Climate Assessment:

Wielicki noted that coastal areas are particularly vulnerable because of rising sea levels. Yet, the coastal population is increasing by 1,000,000 people per year. Many of these areas have key infrastructure such as ports, military bases, power plants and tourism.

The sea level in Virginia is projected to rise anywhere from seven-tenths of a foot to as much as six feet by 2100. "For example a four-foot sea level rise by 2100 would lead to '100 year floods' every 20 years, said Wielicki.

"People have tended to look to end-of-the-century predictions ... but even if you look at more modest numbers, you still end up with significant areas of human occupation and infrastructure at risk," said Carl Hershner Jr., director of the Center for Coastal Resources Management and associate professor of marine science at the Virginia Institute for Marine Science (VIMS) in Virginia Beach.

Hershner was co-lead of a report -- "Recurrent Flooding Study for Tidewater Virginia" -- issued last week that noted water levels in coastal Virginia have risen more than a foot in the last 80 years.

"We also need to develop a true international climate-observing system and improve the links between climate science, economics, and decision-support systems, including political systems," Wielicki said.

Politics played a role in even the naming of the VIMS report. Some lawmakers succeeded in keeping the words "sea level rise" out of the title, citing the phrase as "liberal code."

Said Wielicki of the report's conclusions: