It's no mystery that over the years society has enjoyed amenities and technological advances made by NASA. Often these discoveries find their way into mainstream lifestyles through a process referred to as technology transfer or spinoffs.

So can the agency that brought you semiconductor cubing, enriched baby food, improved athletic shoes and comfier mattresses help solve a mystery of national importance?

The Charters of Freedom -- the Declaration of Independence, the Constitution of the United States, and the Bill of Rights -- are the most important documents in the history of our nation and the foundation upon which our democratic society was built. The National Archives and Records Administration (NARA) in Washington is charged with the care and preservation of these historical documents. When NARA conservators discovered the presence of mysterious crystal-like flakes on the glass inside the encasements, only a couple of millimeters from these legendary icons of political prose, they looked to a space-age administration for help. 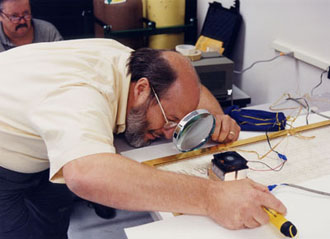 On July 28, 1998, NARA's chemist Margaret Kelly called NASA Langley Research Center's Science Directorate to speak with scientist Joel Levine. She recalled a Nightline episode from November 1992 regarding three lead coffins (thought to be hermetically sealed) found during an archeological dig in St. Mary's City, Md., where a 17th century church once stood. Levine, who has an interest in the atmosphere's evolution, saw great possibilities for atmospheric research in extracting samples of this pre-industrial air and was being interviewed by Ted Koppel, host of Nightline. Kelly was so impressed with Levine's research that she remembered him when NARA conservators began asking questions about the tiny white spots.

Levine was asked to put together a team of researchers to determine the cause of the mysterious crystals and suggest tests for committee approval. The team would try to answer the following: had the helium gas used to protect the Charters leaked out of the hermetically sealed encasements; did chemically corrosive air (with its variety of acids, humidity, and trace elements of ozone) leak in; and what was the relative humidity in the encasement atmospheres?

Realizing the importance of reliability in solving any case, scientific or historic, Levine reported to the NARA committee that three separate measurements would be performed to determine the encasement atmosphere's chemical composition.

For the first test, NASA Langley's team initially proposed taking the encasements into a freezer for a few minutes and then taking the temperature of the glass when the water vapor condensed. At this point, the team could use thermodynamics, or the study of the movement of energy and how energy instills movement, to measure the humidity within a very high rate of accuracy.

This method was met with an emphatic "no" from NARA conservators. Freeze the Charters? Droplets falling on the Charters and smearing the naturally based iron-gall ink? Not an option. 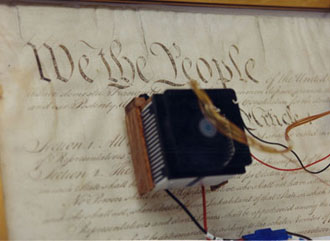 Image to left: A close-up of the micro-cooler used in the thermodynamics testing (micro-cooler a product of the Edmund Scientific Corporation, New Jersey). Image credit: NASA

Despite being denied this approach, which was dubbed the "cooling condensation" method, Levine and his detectives strongly believed in its potential and decided to pursue the possibilities before completely abandoning the idea. Then, Levine and his team heard about a little gadget called a micro-cooler. This minute box -- not much larger than a pillbox -- was noted for cooling a very small region, about an inch squared.

Their good fortune continued. NARA had the engineer's 1950 encasement model -- a technical duplicate of the actual case -- and a hand made facsimile of the Declaration of Independence. Levine and the team could investigate using the case and the facsimile as a prototype for testing of the actual encasements and documents. The NARA committee approved the micro-cooler measurements and the investigation continued.

The next testing method, laser spectroscopy, measures the interaction between light and matter to identify the existence of substances and quantify them. The tests to measure helium and relative humidity were obtained noninvasively using instrumentation and techniques originally developed by NASA to measure trace gases in the Earth's atmosphere and chemical impurities and moisture levels in wind tunnels.

A third measurement, gas chromatography, a test that separates chemicals in a complex sample so they can be detected and identified individually, was performed when the encasement seals were broken to transfer the documents to new cases. The total amount of gas in the older cases was equivalent to a pop bottle full of helium. The results of this final invasive technique would either validate or negate those of the noninvasive methods for both helium and humidity.

If the results of three separate tests performed blind of one another have what is considered in the scientific community to be excellent agreement, then a reliable conclusion has been found. For the Charters, results of the noninvasive tests agreed on one thing: the encasements had not taken in air nor had five of the seven leaked any helium. The other two had retained about 75 percent of their helium.

But what about the humidity?

Gas chromatography is considered highly reliable. The relative humidity within the cases should have remained at their original values of between 25 and 35 percent. However, in each instance, the humidity level had doubled or more than doubled.

The answer lay beneath the Charters.

Each document rested on 10 sheets of backing paper. It was deduced that the backing paper had released its absorbed water vapor into the encasement atmospheres through a process called "outgassing." This process is the slow release of a gas that has been frozen, trapped or, in this case, absorbed by some material or matter.

NARA requested further examinations by an independent physicist who calculated that after 50 years the 10 sheets of paper would have outgassed enough vapor to increase the relative humidity to within the exact range NASA scientists, engineers and technicians had reported.

The NASA Langley team helped solve the mystery by confirming there was not a helium leak or an invasion of chemically corrosive air. And the relative humidity within the cases was at least twice what it should have been, resulting in deterioration of the glass and formation of the mysterious crystals. These white spots were sodium hydroxide -- a very caustic substance commonly know as lye.

Today, the Charters of Freedom are being protected for many more generations to come thanks to the NASA Langley scientific sleuths and their research methods. The Charters of Freedom were placed back on display as part of a larger project that included redesigning the National Archives Rotunda on September 17, 2003.