AERONET Mission Follow Up: Finding an Instrument's Place Under the Sun

East Africa now has some new NASA technology to monitor the tiny particles in the air known as aerosols. 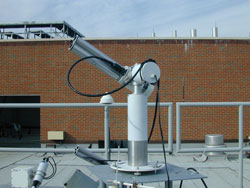 Image to right: Sun Photometer Pointing at Sun and Taking Measurements -- A Sun photometer measures the intensity of sunlight arriving directly from the Sun. They are pointed directly at the Sun and measure direct sunlight. Since haze and aerosols block some direct sunlight, a Sun photometer is an ideal instrument for measuring haze. Click on the image to enlarge. Credit: NASA

Michael King was accompanied by Dr. Charles Gatebe, Assistant Research Scientist at the University of Maryland-Baltimore County’s (UMBC) Goddard Earth Science and Technology Center (GEST); Brent Holben, GSFC Project Scientist for AERONET; and Dr. Ali Omar, scientist from NASA Langley Research Center, Hampton, Va. They traveled throughout East Africa to find the perfect location for the AERONET instruments. The AERONET sunphotometers will check to make sure satellite measurements are accurate, and add to the knowledge of tiny aerosol particles' effects on climate change.

They visited various parks and nature sites, including Mbita Point Research and Training Centre on Lake Victoria, Nairobi National Park, Masawa, Eritrea on the Red Sea and the western Rift Valley in Uganda. 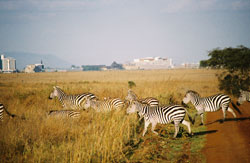 King's team met with science and technology officials and lectured at universities, high schools and community organizations about the AERONET project and NASA's interest in East Africa. Some of those institutions they spoke at included: University of Nairobi; Egerton Universtity, Kenya; Kiriti Secondary School, Nyeri; and Tanzania Meteorological Agency; Makerere University; Eritrea Ministry of Education. 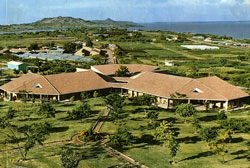 NASA's Earth Observatory Web site is full of information available and useful to people throughout Africa, and all over the world. To access the web site go to: http://earthobservatory.nasa.gov . NASA scientists are soon to follow up this trip and continue to make certain that the AERONET instruments will be placed in the locations that best fit its requirements to observe areas sufficiently.


For more information and related images, please visit on the Internet: