The instrument, to be completed in 2017 at a cost of no more than $90 million, will share a ride on a commercial satellite as a hosted payload. It will be launched to an orbit about 22,000 miles above Earth's equator. The investigation will for the first time make accurate observations of tropospheric pollution concentrations of ozone, nitrogen dioxide, sulfur dioxide, formaldehyde, and aerosols with high resolution and frequency over the U.S, Canada and Mexico. 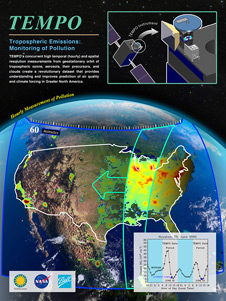 The competitively selected proposal, Tropospheric Emissions: Monitoring of Pollution (TEMPO), is led by a principal investigator, Kelly Chance, at the Smithsonian Astrophysical Observatory in Cambridge, Mass. But the project scientist, David Flittner, and project manager, Wendy Pennington, are based at NASA Langley.

"We have a great team," said Pennington. "We came together on the proposal quickly and established a very good partnership."

"Many of us in NASA have been talking about using commercial geostationary space for climate research for a long time and now we have an opportunity to do so. It is a very exciting time for us," said Frank Peri, the head of Earth System Science Pathfinder program. "The vantage point of geostationary orbit offers us an unprecedented ability to monitor air quality across North America and to specifically observe and track the evolution of pollution. This is very compelling science."

The TEMPO team will provide an instrument by September 2017 that NASA will seek to deploy on an appropriate satellite in geostationary orbit. Investigation costs will be capped at $90 million, excluding the launch vehicle and integration to the selected satellite platform. Numerous commercial communication satellites are expected to be suitable for the TEMPO instrument in the 2017 time frame.

After being deployed on a geostationary satellite, TEMPO will observe Earth's atmosphere in ultraviolet and visible wavelengths to determine concentrations of many key atmospheric pollutants. From geostationary orbit, these observations can be made several times each day when North America is facing the sun instead of once per day, which is the case with current satellites orbiting a few hundred miles above the surface. Other space agencies are planning similar observations over Europe and Asia after TEMPO is in orbit, allowing for the formation of a constellation of geostationary air quality satellites.

NASA is planning to announce two new Earth Venture calls for proposals in 2013 and make awards at regular intervals for investigations using cutting-edge instrumentation carried on airborne platforms, on small space missions, or as secondary instruments or hosted payloads on larger platforms. The missions in this program provide an innovative approach to address Earth science research with periodic windows of opportunity to accommodate new scientific priorities.

In 2007, the National Research Council recommended NASA undertake this type of regularly solicited, quick-turnaround project. The first Earth Venture selection was awarded in 2010 for five airborne investigations. The second was for a full satellite mission, the Cyclone Global Navigation Satellite System, announced earlier this year. This announcement is the first Earth Venture Instruments award.