TAMDAR: A Tiny Instrument Making a Big Impact on Weather Forecasting
Each day, hundreds of small and medium-sized aircraft fly across the U.S. at relatively low altitudes, coming face-to-face with our weather. These short-duration flights fly straight though the lower atmosphere, taking on the rain, wind, snow, ice, and other conditions that are very similar to what we feel on the ground. Weather forecasters rely on measurements of conditions made at the ground, plus a small number of weather balloons launched into the atmosphere. Recently the number of weather measurements increased dramatically when forecasters joined forces with NASA and a mid-western commuter airline to take advantage of the wealth of weather data that these airplanes experience daily. 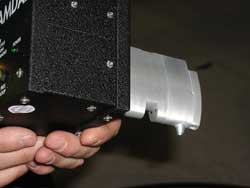 Since January 2004, as part of the Great Lakes Fleet Experiment, 63 Mesaba Airlines aircraft have flown their usual routes, with only one difference: these aircraft were equipped with the Tropospheric Airborne Meteorological Data Report (TAMDAR) instrument. TAMDAR measures humidity, pressure, temperature, winds, icing and turbulence with the help of location, time and altitude provided by built-in Global Positioning System technology. Observations are sent by satellite to a data center on the ground, which processes and distributes up-to-date weather information to forecasters, pilots and those who brief pilots.

"If you talk to any of the local forecasters at the National Weather Service offices located throughout the middle third of the country who have been using this data for their forecasting, they are ecstatic," said Taumi Daniels, NASA TAMDAR project lead.

The small instrument, which weighs only one and a half pounds, was designed and built by a team led by researchers at NASA's Langley Research Center in Hampton, Va. TAMDAR was designed to be used in forecasting a number of atmospheric conditions.

"Meteorologists here at the National Weather Service have found TAMDAR to be useful in forecasting severe thunderstorms, dense fog, precipitation types of winter storms and low-level wind shear," said Richard Mamrosh, National Weather Service meteorologist in Green Bay, Wisc. "In summertime its best use is in determining if and when thunderstorms might develop. In wintertime it really helps in determining whether a storm will bring sleet, freezing rain or snow." 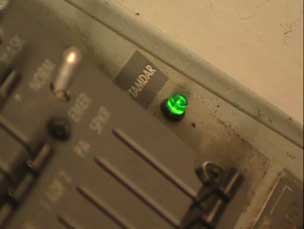 Image to left: Shown here is the the TAMDAR instrument indicator light in the cockpit of one of the Mesaba airliners. Click image to view video. Credit: NASA

The National Oceanic and Atmospheric Administration (NOAA) and the Federal Aviation Administration (FAA) are working together to supplement weather observation systems with TAMDAR data. Ultimately, the TAMDAR team is working to provide future pilots with improved weather information to make better informed decisions.

Preliminary results from the Great Lakes Field Experiment show that TAMDAR data also made a substantial impact on numerical forecast models. For temperature measurements, the instrument made a 20 percent reduction of error in three-hour forecasts. For relative humidity and wind, the instrument reduced three-hour forecast error by approximately 12 and 10 percent respectively.

"These models are millions of lines of computer codes and they've been tweaking these models for the past ten years or so. With each tweak they like to try to get a half percent or one percent reduction in error," said Daniels. "So the ingestion of this new data has made a very significant improvement in reduction of error."

Collecting these data can really benefit all weather forecasts and weather forecasting models, because the presence of TAMDAR increases the number of observations in the lower atmosphere by a significant amount. Currently there are only 70 weather balloon sites in the continental U.S. that are used to collect temperature, wind and moisture data from twice daily atmospheric soundings. The Great Lakes Fleet Experiment added 800 more daily atmospheric soundings.

"This is the first time we have had this type of information at low and middle altitudes on such a large scale," said Dr. Patrick Minnis, a senior research scientist in the Science Directorate at NASA Langley. "Before TAMDAR we only had this kind of data from short field experiments." 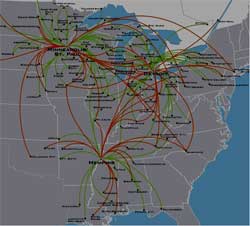 Image to right: This image shows the Mesaba Airlines weekly commuter flights. With TAMDAR on board these flights, the number of weather soundings in the lower atmosphere has increased by a significant degree -- from approximately 140 soundings to more than 800. Click on image to enlarge. Credit: Mesaba Airlines

For scientists in the Science Directorate and their colleagues, the increased number of soundings and, especially, the new icing sensor data mean increased ability to verify and improve their satellite cloud products. Minnis and colleagues, John Murray, Louis Nguyen, and others, are refining methods to determine which clouds observed in weather satellite images are likely to produce aircraft icing conditions. Their results will improve icing "nowcasts" and forecasts, the information pilots use in-flight and before takeoff to determine the potential for and the severity of icing at a specific altitude.

The TAMDAR team tested the sensor in an operational environment for the first time to help determine the value of airborne observations on aviation forecasts. Mesaba is a Northwest Airlink affiliate headquartered in Minneapolis, Minn. TAMDAR was developed by the Georgia Institute of Technology Research Institute, Atlanta, Ga., and AirDat, L.L.C., Morrisville, N.C. for NASA.

The future of TAMDAR looks bright. Mesaba has asked to continue using the sensors, while Horizon Airlines, a subsidiary of Alaska Air, has signed up with AirDat to integrate the instruments into their aircraft. AirDat is also working to expand the TAMDAR equipped fleet to cover the entire continental United States.