Grow Text SizeShrink Text Size
The 'Un-Flyable' Space Shuttle
April 12 marks the 30th anniversary of the launch of STS-1, the first space shuttle mission. To commemorate that occasion, and to mark the end of the shuttle program, the Researcher News will present occasional stories in a series on NASA Langley’s role in the shuttle program. Today: In the Beginning.

The first time NASA engineer George Ware saw a model for the space shuttle, four decades ago, it had a straight wing and tail like a fighter airplane. It had elevators, a rudder and an engine. 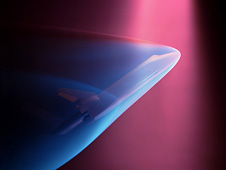 1975: A space shuttle model undergoes a wind tunnel test simulating the ionized gasses that surround the shuttle as it reenters the atmosphere. Credit: NASA 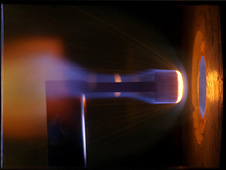 1975: The high temperatures which were to be encountered by the Space Shuttle were simulated in the tunnels at Langley in this test of the thermal insulation materials which were used on the orbiter. Credit: NASA 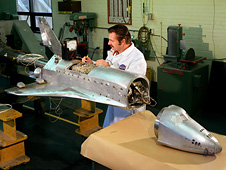 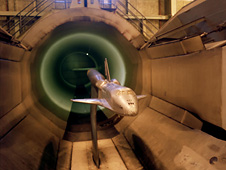 1978: A wind tunnel model of the Space Shuttle orbiter being tested at NASA's Langley's 16 foot Transonic Wind Tunnel. The data collected by the 5.5-foot-long model were integrated with other data and become part of computerized flight simulation programs. Credit: NASA 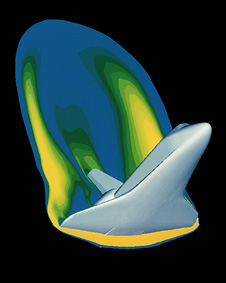 "It was their idea that it was going to enter the atmosphere at a 60-degree angle," said Ware, who had just joined the Vehicle Analysis Branch at NASA's Langley Research Center in Hampton, Va., which was tasked with testing shuttle configurations offered by the Johnson Space Center and contractors.

"At some lower speed, closer to transonic, it would pitch over and start flying like an airplane," said Ware, now retired. "It would be on a reusable booster as well."

It was supposed to fly up to 50 times a year at $10 million per trip. But that return to Earth was throwing everybody, because air flow onto the straight wing as it came into the atmosphere caused the plane to crash, at least on paper. Models of all four candidate configurations had problems, and the two boosters attached to them and tested in various combinations didn't help.

Ware still has lab books that look as though they have red-inked brushfires ignited by failed tunnel tests of shuttle and booster. Langley wind tunnels logged 59,200 hours from 1970-82, with the work spread over a dozen facilities. That included time spent with what was the eventual shuttle: a double-delta shaped craft.

"Langley at the peak had 350 people, 350-people years of effort, at the completion of Phase B, which I believe was in '76," said Paul Holloway, who was with shuttle from its beginning and who eventually became Langley's center director.

"In September of '79, we were down to 30- to 40-man-years of work. Then tile problems began to arise. The concern was the structural and mechanical safety of the tiles. Would they stay on?"

Developed by NASA Ames Research Center, the tiles were attached to the shuttle to mitigate the heat that accompanies reentry into the Earth's atmosphere. But tests showed a problem with bonding the tiles to the shuttle's aluminum skin.

"They were testing in the 8-foot pressure tunnel, using a section of tiles 8-by-10 feet," Holloway said. "They were testing to see how strong the bond was. If a tile got loose and came off, and several tiles came off behind it. It was called the zipper effect, and it terrified everybody associated with the program."

Said Del Freeman, who also tested in the wind tunnels: "This was nothing like anything we'd ever done before. It wasn't like an airplane. An airplane, you'd send it out to a boundary, get it back, then send it out again at a different boundary. We had to get this right the first time."

The tile issue pumped Langley participation back to 350-man-years.

While shapes were tested, a young engineer just out of Virginia Tech was tasked with building a simulator to fly the nascent shuttle.

"The first thing you learned was that everything you learned in school was at least 30 years out of date," said Dick Powell. "With the shuttle, we had to re-write a lot of the textbooks. The shuttle was the first operational all-digitally controlled airplane."

It was a craft that required new notions about control.

"Most airplanes have elevators and ailerons, and they have slots, and they have slats and flaps and other stuff," Powell said. "The only things a shuttle has are a rudder, a speed brake, two 'elevons' and a body flap."

"Elevons," Powell added, "do the work of both elevators and ailerons."

He laughed at remembering a movie made much later, "Space Cowboys," in which the shuttle was called a "Flying Brick."

"We actually called it that ourselves," Powell said. "Without the computers on board to augment stability, the shuttle is un-flyable. You could not do what Clint Eastwood did in the return, when he shut down the computers. You'd end up in pieces on the ground."

Powell remembers being summoned to the office of his boss, Gene Love, and told to build a flight simulator. Johnson Space Center was leading the guidance, navigation and control efforts, but Love wanted to understand the aerodynamic uncertainties of the shuttle's entry, since Langley was largely responsible for the aerodynamic database.

"I didn't know what a flight simulator was," Powell said. "I had to learn quickly, because Gene Love was impatient. If he told you today, he wanted it yesterday. That's how I got into flight mechanics."

"Larry Rowell and I found an old airplane cockpit about the size of a golf cart and refitted with an old Apollo joystick and some (cathode ray tube) displays. We used to roll it up to a computer on the second floor. Computer time was scarce back then, but it wasn't scarce at night and on weekends."

Nearby, Langley also was working on shuttle payloads. "There was no payload on the first flight of shuttle," Holloway said. "The second flight had four instruments, and two of them were from Langley. We weren't supposed to be a big payload center, but we were ready. Out of all of that came the Langley Atmospheric Sciences program, which is the premier in the country, maybe the world."

There were two late additions: a camera mounted in the tail to shoot infrared video over the wing; and pressure caps in the nose to determine the flow field.

Both were Langley ideas that had to be sold to shuttle heads at Johnson.

"Imagine going to the director of spaceflight, who was John Young, and telling him we wanted to drill holes in the carbon-carbon nose," Holloway said, laughing. "You can imagine what the welcome was. But we did prove analytically and through tests that you could do it, and we did it."

The tail camera "showed that part of the shuttle was over-engineered," Holloway said. "That was weight, and weight was payload."

The pressure caps in the shuttle's nose flew several times and a derivative will fly on the Mars Science Laboratory, to be launched later this year.

On April 12, 1981, Ware, Powell, Holloway waited for the televised launch of Columbia and STS-1.

"You were thinking of all of the things you could still be doing to it if you had the time and money," Powell said. "What had you forgotten to test?"

"If you had to pick a time to work at NASA, I think Apollo would have been No. 1 and shuttle would have been No. 2," said Powell. "It was probably the time the NASA centers worked together best, because everyone was trying to solve a common problem and everybody was doing everything they could to make it work."