Grow Text SizeShrink Text Size
Big and Bright 'Perigee Syzygy' Moon Occurs Saturday
If you're lucky enough to have clear skies this weekend, you'll see a full moon at its closest point to Earth since January 30 of last year. 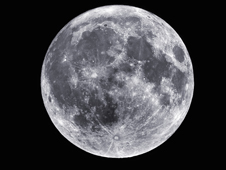 The technical term is perigee-syzygy. A popularized term is "super moon."

The occurrence is more technical than visible.

A full moon at its closest point to Earth definitely will be big and bright. But it won't look much, if any, different than a "normal" full moon and will not have any readily observable effect on our planet except perhaps slightly higher tides.

The phenomena occur four to six times a year.