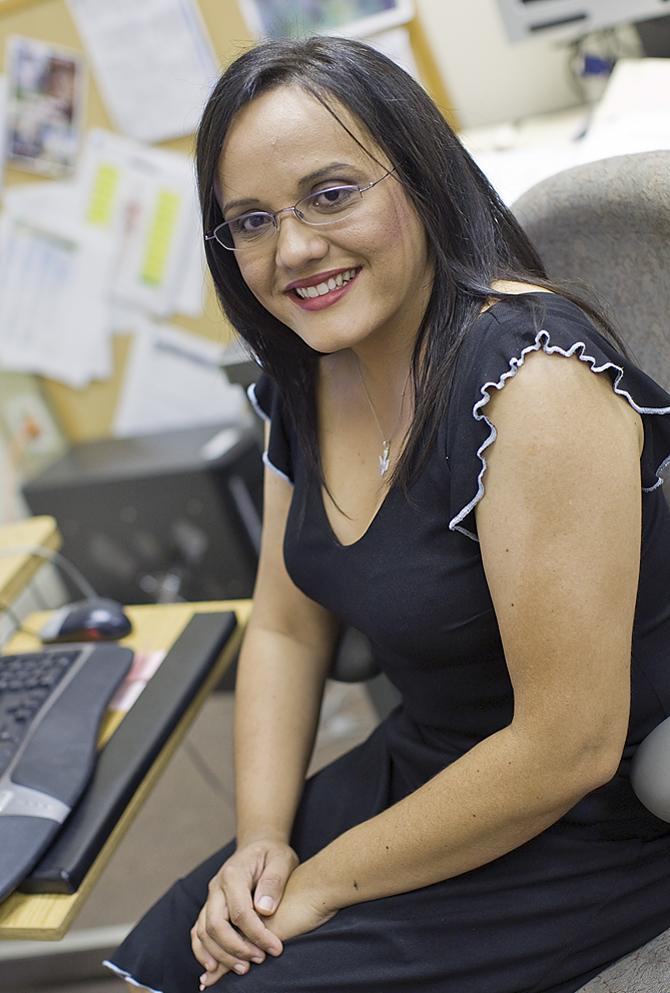 Image above: After coming to NASA's attention in a job fair in her native Puerto Rico, Yamira Santiago works in stress testing at Langley and also participates in tests at the Gantry. NASA/Sean Smith

Yamira Santiago has been down several paths. She has worked as a math tutor, a computer science teacher, a physics teacher and as a librarian. Though at the time she wasn’t sure where all those paths would lead, an opportunity six years ago put it all into perspective.

Santiago was working as the information literacy librarian for the Polytechnic University of Puerto Rico when a recruiter from the National Imagery and Mapping Agency told her about a NASA job fair at another campus 2 1/2 hours away.

The fair was a part of a five-year NASA Corporate Recruitment Initiative, which began in 2003. Among the goals of the program was an effort to increase diversity in the workforce.

"I had been dreaming of NASA since I was really small," said Santiago, who grew up in Aibonito, Puerto Rico.

Santiago rushed over to the job fair where she had a successful interview. She was offered a two-year internship at Langley from 2004-2006.

Though she loved Puerto Rico, she was eager for a new opportunity. Santiago, a professed workaholic, suddenly believed that everything she had done up until this point in her life had prepared her for her new journey.

"I began to see the bigger picture – how my math and physics background as well as my job as a librarian would help me at NASA," she said.

Santiago left her family and moved to the United States. Though she made the move alone, she wouldn't feel that way for very long.

"From Day One I found a family here at Langley," she said. "Everyone was very helpful. I didn't have a car at the time, and my coworkers would help me with running errands."

When her internship ended, Santiago was offered a civil service position working as a computer research scientist in the Safety-Critical Avionics Branch. Her roles have expanded since 2006, and she also supports the Crew Systems and Aviations Operation Branch as well as the Advanced Sensors and Optical Measurements Branch.

Santiago's duties at NASA keep her busy, and she couldn't be happier.

Presently, Santiago is overseeing the software development of the Multi-Attribute Task Battery, a multi-tasking test bed that studies how people react to stress when they are given several tasks at once. The simulation represents a cockpit and has been used to research reactions of military pilots, general aviation pilots and non-pilots.

When she's not working on that, Santiago is running videogrammetry in support of the landing tests being conducted at the Gantry for Orion.

"It's very cool," she said. "They drop the test article, and my job is to give useful information about the trajectory and behavior of the model once it lands. I process the data for the tests."

Though she loves the technical side of her job, Santiago believes she is fortunate that NASA also allows her to express her creativity. In her spare time, she plays the recorder and saxophone, and she enjoys calligraphy and beading, among many other interests.

"NASA is not only technical. We impact the community and motivate the next generation," she said. "I can apply my different talents here. NASA gives me the opportunity to reach people through my ethnicity, and I enjoy the variety here. I can be creative and think outside the box. I can voice my opinions and feel that someone is listening."

What she loves most about working at NASA and living in Hampton Roads is the sense of community. Santiago said the campus-like environment at NASA made the transition from her college life to work life much easier. She finds that people are welcoming and eager to help. Earlier this summer, her coworkers helped her gather hundreds of toys for a mission she supported through her church -- Bethel Temple in Hampton, led by the Hispanic Congregation.

While she travels a lot to visit her family in Puerto Rico, Santiago considers Hampton home. She loves being close to the water and having so many options of things to do and places to go.

"People here do a lot of things besides work," Santiago said. "People are really talented. Here you can make a living being an artist or a musician. In Puerto Rico, we have music in our blood, but you can’t make a living that way."

So it seems, the phone call Santiago received six years ago was the starting point for something much larger.

"I feel very lucky," she said.