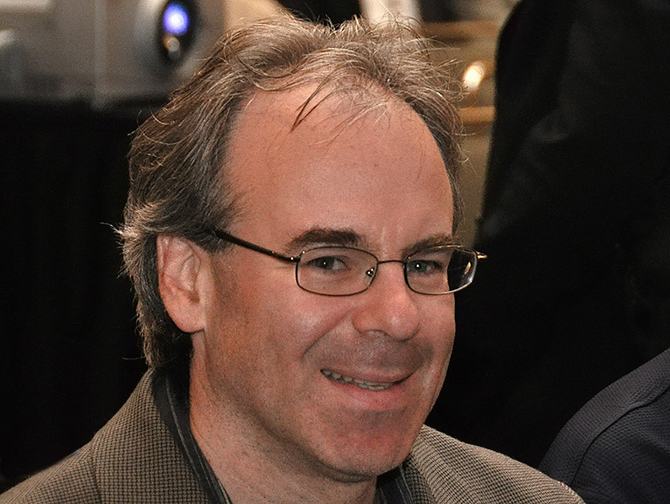 Image above: Norman Loeb, CERES principal investigator, has been away from his desk at Langley this week to attend the American Geophysical Union (AGU) fall conference. Credit: NASA/Katie Lorentz

When Norman Loeb speaks of climate change, he uses an analogy.

“If you have certain habits, you don’t exercise, you smoke, you eat fatty foods, there is a good possibility that you will get one of several diseases,” said Loeb, principal investigator of Clouds and the Earth’s Radiant Energy System (CERES).

“The climate system is like that. We can’t say for sure everything that will happen and when, but we can say with a reasonable certainty that if we continue on the present course, we will see far greater changes to our climate than we’ve experienced during the last few decades. In our region, sea-level rise is the change I’m most concerned about.”

Loeb, who worked with CERES in a post-doctoral program before he came to NASA Langley about 10 years ago, couches his words carefully. He seems reluctant to speak in absolutes about global warming, but instead cites overwhelming evidence. In his health analogy, a doctor knows that there are people who live to age 90 and smoke three packs of cigarettes a day, but has plenty of evidence to show that it’s the exception, not the rule.

The real difference in the comparisons is stark.

“We have only one Earth,” Loeb said. “Whereas a doctor will have several cases to study, we don’t have a bunch of Earths. We’ve got to get this right.”

It’s the reason for CERES, which has been sending instruments aloft since 1997 to measure the solar radiation absorbed by Earth and the infrared radiation the Earth emits to space. CERES is celebrating 10 years of data transmission from TERRA, its second satellite carrier, at the American Geophysical Union (AGU) annual meeting in San Francisco this week.

Instruments in space do not enter political debates.

“If you believe global warming is happening, and I think 95 percent of scientists do, or even if you don’t believe it, I think everyone can agree that we should measure the system,” Loeb said. “Whatever conclusions you make are based on scientific observations, and if we don’t fund basic measurements of the system, then I think we’re in trouble.”

It’s his message in meetings and conferences all over the world. Loeb travels at least once a month.

It makes time spent at home, walking on the beach in East Ocean View with wife Ava and their dog, Cruiser, more valuable. He also enjoys playing in an “over-35” basketball program in Virginia Beach, staying current in a sport he learned while growing up and attending an English school near his home in St. Jerome, a town near Montreal in predominantly French-speaking, hockey-playing Quebec.

Loeb is bi-lingual, though admits that his French is eroding from lack of use.

Also, “I played organized hockey as a kid,” Loeb said. “I stopped once I reached 12, 13, but played rec hockey once in a while.”

He was educated in Montreal’s McGill University.

For all of his beach walks, Loeb understands that it’s never possible to escape the global warming debate.

“I think it’s probably the right role for scientists to just do the science in an objective fashion and not be advocates,” he said. “If the science is compelling one way or the other, certainly we should go forward and make recommendations based on the scientific fact.

“That’s really our role. But I don’t think we should have to lobby politicians.”

He also understands the evolution of the debate and that it’s increasingly come down on the side of science, but that a lack of absolutes fuels controversy.

“People want proof,” he said. “We can only rely on observations, the history of the Earth and on computer models that simulate the Earth. We look at projections of certain scenarios, and it’s our job to keep those models honest and identify weaknesses and strengths.”

He is adamant, though, that the problem with global warming exists.

“In the science community, 90-95 percent of the scientists understand the problem as being significant,” he said. “It’s pretty basic physics.

“The media wants two sides of the story, so they will present the side represented by the other 5 percent. So the public gets the impression that this is a 50-50 debate, and it isn’t. And more and more I think the media is finding it harder to find scientists on the denying side.”

That’s because more and more data, like that from CERES, is fueling the position of the side of the majority. It’s why the CERES group is receiving the William T. Pecora Award for its contribution toward understanding the Earth by means of remote sensing.

“And we have a lot more work to do,” Loeb said.