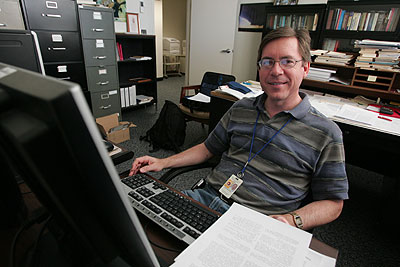 Marty Mlynczak, Science Directorate, works as a senior research scientist leading the development of satellite experiments. He is the co-principal investigator (co-PI) for SABER, an instrument on the TIMED satellite, and also was the PI for MATADOR, a mission currently in development.

Upon completing his bachelor's degree in physics at the University of Missouri - St. Louis in 1981, the Florissant, MO, native went on to acquire his master's degree in meteorologyclimate atmospheric science. Later he received his doctorate in atmospheric sciences from the University of Michigan in 1989. In May of this year, Mlynczak was honored with the Distinguished Alumnus Award from his undergraduate physics departmenti on behalf of his ouststanding achievements during his career here with Langley Research Center.

"My favorite part about working here at Langley would be the variety of work opportunities," said Mlynczak. "I love working with a lot of different people from around the world."

Outside of work, Mlynczak spends much of his time with his wife and two teenage daughters. And because the nature of his work provides a flexible schedule, he is able to drive his daughters to dance practice and get in some quality father-daughter time.

Overflowing with passion, Mlynczak spoke of his childhood days, growing and watching the St. Louis Cardinals. "The St. Louis Cardinals were very much a part of the culture in St. Louis," said Mlynczak. He is also full of interesting facts, such as: the Cardinals are second behind the New York Yankees in World Series appearances. That fact was definitely something to think about.