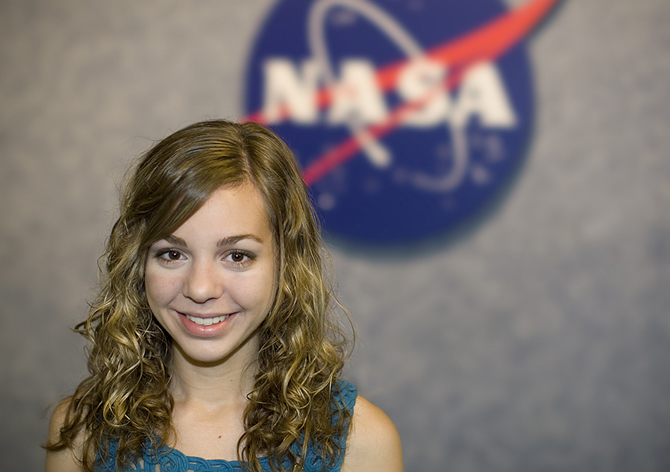 Image above: Kristen Ruiz is a high school student working at NASA Langley for the summer. Credit: NASA/Sean Smith.


Kristen Ruiz is a rising senior at Grafton High School working in the Office of Strategic Communications and Education. Her mentor this summer is Donna Lawson, NASA Langley's legislative liaison.

English, she says, is her favorite subject in school and one that she hopes to pursue in college. Ruiz isn’t yet certain which college she will attend.

As part of her summer work at Langley, she attended NASA Day on the Hill, a Wednesday function in Washington at which the agency brought its accomplishments to the Rayburn Building, where there are offices of some of the people who vote to fund NASA.

These are her impressions:

NASA Day on The Hill, which was held June 18, was a day of excitement as well as a time for celebrating NASA’s 50th anniversary. Employees from NASA centers all over the country set up exhibits in the lobby of the Rayburn Building on Capitol Hill, showing models of the projects that they have been working on. As I walked around, I was able to learn more about the different things NASA does, and meet some interesting people along the way.

The first exhibit I visited was a model of the LRO, or Lunar Reconnaissance Orbiter. James Garvin, of Goddard Space Flight Center, explained to me what the purpose of it is, as well as how it works.

As the first mission in NASA’s Vision for Space Exploration, the LRO is supposed to be launched about November 28. It will monitor the moon for one year. Using cameras, lasers and radar, the LRO will be able to take pictures of the moon and determine if there is water at its poles.

Another goal of the LRO is to search for resources that we can use here on Earth. A part of the LRO exhibit that I found fascinating was the moon rock. Mr. Garvin explained to me that it is “probably the oldest thing you will ever see,” about 3.6 billion years old. Coming from a place with no atmosphere, the moon rock has to be encased in a small glass box because it has “never seen air.” 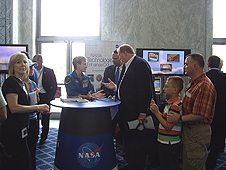 People lined up to talk with astronaut Peggy Whitson and get her autographed photo at the 3rd Annual NASA Day on the Hill. Credit: NASA/Donna Lawson

Click on the image for a larger view
It was incredible to me that the rock I was staring at was brought back to Earth by Neil Armstrong. The small rock that appeared to be so light actually consists of 10 percent titanium, as opposed to Earth’s rocks , which consist of about 1/10 of a percent of titanium, according to Mr. Garvin.

As I wandered to the center of the room, I came upon a full-scale model of the Phoenix Mars Lander. Part of Mission Phoenix, the lander digs into the soil on Mars, searching for evidence of water and exploring potential habitability on the planet. An arm extending from the robot is able to capture pictures of Mars, enabling scientists to explore these possibilities.

The next exhibit I visited was of the Hubble Space Telescope. Russ Werneth, of Goddard Space Flight Center, explained the telescope to me. Measuring 43.5 feet long and 14 feet in diameter, the telescope orbits Earth every 97 minutes. It takes pictures of space and has so far seen galaxies up to 12 billion light years away.

The telescope has had four servicing missions, and its fifth mission is set for October 8. The space shuttle Atlantis will assist in the servicing of the Hubble Space Telescope.

An exhibit that I found entertaining as well as educational was the NASA Technology Development stand from NASA Langley. A virtual house equipped with a bathroom, kitchen, bedroom and living room was displayed on a computer screen. Visitors were able to click on the room that they wanted to view, and each room had everyday items in it, such as helmets, coats, beds, etc. If you scrolled over an item, there was an in-depth explanation on how that item is used, how it was discovered or created, and how NASA aided in its discovery.

I liked the fact that it was thought-provoking; I never would have thought twice about how all the items I use every day came to be.

During my trip, I talked to visitors Mark Kahle and his daughter Isabella. When asked which displays were their favorites, Mark replied that the light-up model of the rotating Earth interested him because the “systemic views [of Earth] as a whole” were interesting and “useful.”

Isabella also found the revolving Earth interesting due to its visual aspects. The “Build Your Own Spacecraft” stood out for her, because it was “interactive” and “entertaining.” Her other favorite exhibit -- which seemed to be popular among visitors of all ages -- was the Next Generation Photo Booth. She thought it was fun because she was able to get her picture taken in front of a green screen with the background of her choice. Among them were the moon, a space shuttle and other planets.

Despite all the incredible exhibits, the most popular attractions at NASA Day on The Hill were two of the guests: astronauts Peggy Whitson and Carl Walz. Visitors were able to get autographs and pictures with the astronauts and also to talk with them. Throngs of people crowded around the tables where the astronauts stood, excited to get a chance to meet them.

My experience at Capitol Hill was fun and extremely educational. The impressive turnout and excited crowd were great indicators of the ultimate success of NASA. NASA Day on The Hill was a great way to celebrate NASA’s long history of inspiring, innovating and discovering.

Have someone in mind that you'd like to see as a Center Snapshot? To nominate someone, send their name, phone number and email address to researcher-news@larc.nasa.gov.