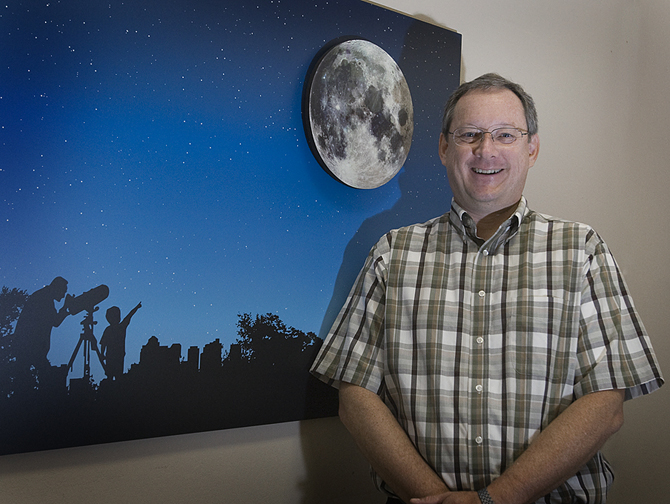 Image above: Joseph Zawodny stands in front of a graphic of astrophotography located in Building 1212. Credit: NASA/Sean Smith

And his hobbies aren’t far from his work.

He has been collecting trains and airplanes since the eighth grade. “I’ve seen airplanes go from liquid fuels to electric,” he said. “Technology infuses all aspects of life.”

Zawodny describes his 10-year-old daughter, Eva, as “independent and interested in a lot of things.” He adds, “My fault, I guess.”

Eva is raising monarch butterflies. “She has 15 to 20 of them in various stages of development,” Zawodny said. To help with her interest, Zawodny and his wife plant “butterfly friendly things” in the yard.

Astrophotography is also a hobby of Zawodny’s.

“Simply put, astrophotography is photography of things beyond the Earth, things like planets, moons, comets, star clusters, nebulae and other galaxies,” he said.

He uses this hobby as an outreach tool for students. “I ask them questions like ‘where would you want to go?’ and they have great answers,” he said. “They are up to speed on this stuff. I don’t think it’s a real hard sale.”

His astrophotography is getting attention from more than just children. The History and Discovery channels recently approached him for permission to use his photographs and possible video for some upcoming shows.

Zawodny receives requests for his material for different purposes, mostly educational, throughout the year. Some requests have come from as far away as India.

“Although my job here at NASA Langley requires that I look down at the Earth's atmosphere from space, I never stopped looking up at space from down here on Earth,” Zawodny said.

He is no stranger to working issues that involve the government. For the first 20 years of his career at NASA Langley, Zawodny was involved with stratospheric ozone research. “Now we’re seeing the fruits of that research,” he said. “The ozone is no longer declining. It is very gratifying.”

But, according to Zawodny, alternative energy will be more difficult to solve. “The solutions for helping the ozone were fairly painless. That is nothing compared to our addiction to fossil fuel,” Zawodny said.

And the seriousness of this addiction. “Some would argue it is life or death of the planet,” he said.

That’s why Zawodny and other scientists are making it their priority to find new alternative energy solutions.

After completing graduate school at the University of Colorado, Zawodny visited NASA Headquarters with his professor to make a presentation on nitrogen dioxide. His presentation led to funding that sent him to NASA Langley to meet with Pat McCormick, now head of Atmospheric Studies at Hampton University.

“We were a good fit,” Zawodny said. And the rest was history.

“I wanted to work for NASA forever,” he said. “I grew up with Apollo and watched the first moon landing. And I’ve been able to correct Walter Cronkite when he was making mistakes.”

“NASA is such a can-do, get it done-organization.” Zawodny said.

“I’m going to make sure I uphold that reputation as we go forward.”

Have someone in mind that you would like to see as a Center Snapshot? To nominate someone, send their name, phone number and email address to researcher-news@larc.nasa.gov.