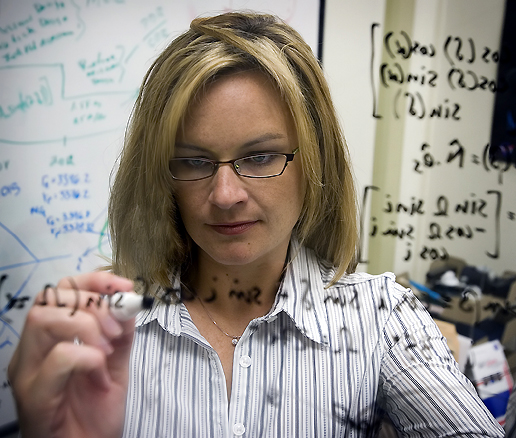 Image above:Jill Prince works on an equation for a spacecraft that is orbiting Titan. Credit: Sean Smith

Jill Prince is an aerospace engineer who specializes in flight dynamics in support of planetary exploration.

"I have worked mission operations for two Mars aerobraking missions; Mars Odyssey in 2001 and Mars Reconnaissance Orbiter in 2005, and I will be involved with flight operations for Mars Phoenix lander EDL (Entry, Descent and Landing) in May 2008," said Prince.

Prince came to NASA Langley as a Joint Institute for Advancement of Flight Sciences (JIAFS) student and continued her work here as a contractor. She became a civil servant in 2002. She has been at NASA Langley since 1999 and has made some major contributions in her time on Center.

When asked what she is determined to accomplish in the future, she jokingly stated, "To find someone to open a Starbucks right outside the gate."

Prince's favorite thing about NASA Langley is "The variety of work that comes to the Center and to our branch. I never get bored."

To escape boredom outside of work, she likes to run, play softball in the Spring and is "embarrassingly addicted to 'American Idol' and '24'."

She also enjoys college football and tends to cheer for the underdog. "Probably because my favorite team is usually the underdog," she added.

Denise Adams
The Researcher News
› Back To Top