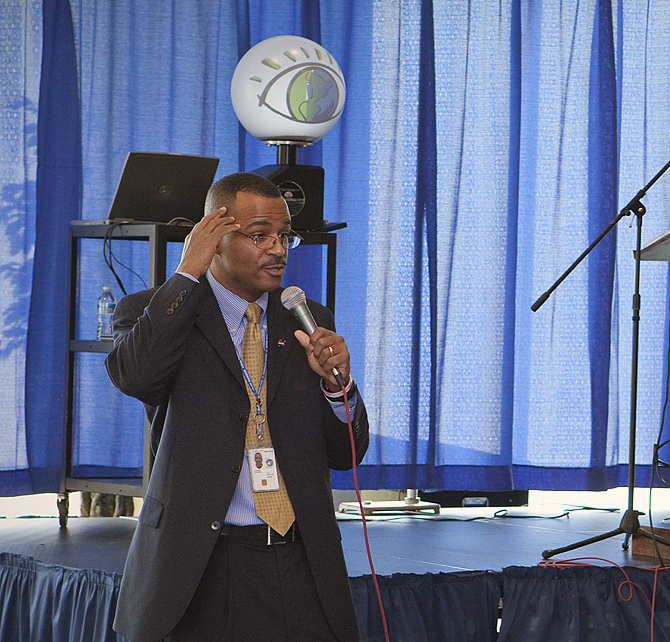 Luther Jenkins remembers taking a tour of a NASA Langley wind tunnel when he was in grade school.

"I remember seeing the tunnel and touching the blades," Jenkins recalled. "The experience just stuck with me."

Little did he know that he would embark on a career that would bring him full circle, back to the wind tunnels at NASA Langley as an aerospace research engineer.

Believing in yourself and following your passion is the message that Jenkins imparted to a crowd of several hundred Hampton elementary and middle school students at STEMtastic Day, an educational event held Thursday at Hampton University as part of the 32nd annual Conference on the Black Family.

Jenkins, who spends his days studying complex airflow and working as an associate principal investigator for the NASA Subsonic Rotary Wing Project, sets aside time to speak with youth about NASA and his love for science, technology, engineering and math (STEM).

Keeping more than 200 elementary and middle school students interested and alert is a feat in itself, and it's something that Jenkins did easily at STEMtastic day.

"It may seem far off, but the future is tomorrow," Jenkins told the students.

He asked them to think about what they are good at doing. He encouraged them to pay attention to what is going on around them, especially during special opportunities, such as STEMtastic day.

"I wish I was sitting where you are today," Jenkins said, "because it is very, very important to start thinking ahead."

Later in the day, students would participate in hands-on activities and hear instructors from NASA and the Virginia Air and Space Center talk about rocket science, robotics, astronauts, air traffic control and aeroscience.

"It’s very important for you to use those tools today," Jenkins told the students. "It’s most important to use your eyes. Things that you can see, that’s what motivates you."

When Jenkins was in seventh grade, he thought he wanted to be a lawyer.

"But I also knew that my real strengths were in math and science," he said.

He remembered the tour of the wind tunnels he took in elementary school and pursued his passion.

After he graduated from Menchville High School, Jenkins, who is from Newport News, went to Brown University to study mechanical engineering, focusing on aerospace applications. He spent three summers interning at NASA Langley in the Langley Aerospace Research Summer Scholars program before accepting a job in 1990. A master’s degree in engineering from George Washington University came next.

It's easy for Jenkins to speak to students about STEM because he sees his job at NASA as more than a way to make a living. It's his passion and it's interesting.

"I think the thing that makes this job the most fun is that you learn something new every day," he said. "I’m constantly discovering new things, answering questions – it's very challenging and it's not routine."

It's Jenkins hope that the time he spends educating students will motivate them to live out their dreams.

"I think sometimes, especially for young people, they may see things they think they may enjoy, but it may be hard for them to see themselves doing it," Jenkins said. "Some who are interested in science and math may even think they're not cool if they excel in these areas. I want to show them that it is cool to be a scientist or engineer."