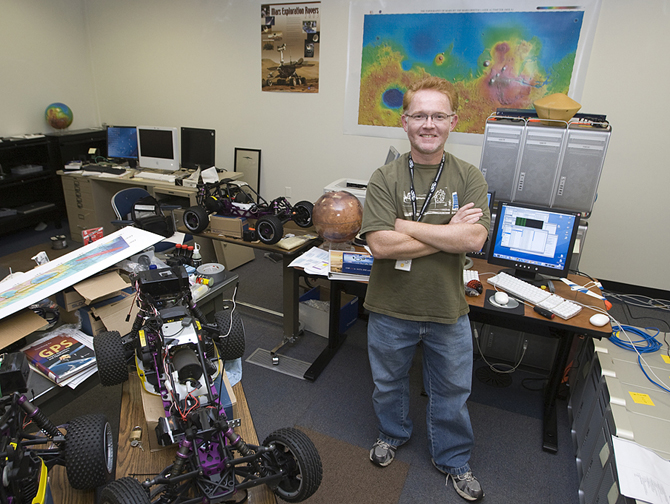 Image above: Garry Qualls is surrounded by tools of his many trades, including computers for monitoring data from Mars and scale-model cars for a project to determine if UAVs can refuel each other while aloft. Credit: NASA/Sean Smith

Once he was a musician, fueled by an Elvis Presley concert in Knoxville, Tenn., in 1972. Garry Qualls celebrated finishing high school in Big Stone Gap, Va., by playing trumpet with a band that toured Europe.

It produced no long-lasting career, but it did ignite a long-lasting relationship. He met wife JoAnne in Germany while on the tour.

But music was a false start, and aerospace engineering and Virginia Tech beckoned, as did NASA Langley during a summer internship.

And now he's in a laboratory in Building 1220, and there's a series of 24 computers, linked to absorb and process data from Mars.

And a model airplane wing.

And a couple of autopilots. And another computer. And another. And cars. Everywhere cars.

And tables with what look like spare parts and wiring.

"If you look at all of this, you'd think I was a tinkerer," Qualls said. "I don't tinker."

Instead, he plots the human body on a computer in intricate detail, transitioning old models from the 1960s and '70s into new ones that take advantage of enhanced electronic capabilities. The idea is to see how detailed the body models can be to accurately predict determine how much radiation astronauts will absorb on future exploration expeditions.

Like so many in NASA, Qualls is working toward a future in space exploration. That future is going to require the human body to be shielded from radiation. But how much shielding, and how much radiation?

"Well, we're showing that you need a lot more than 10 points to get good answers."

He's doing that by using a model of the human body made of voxels, which are something like three-dimensional pixels in a picture. Each voxel is a block that measures 3.6 millimeters on a side. Qualls is trying to take that down to 1.2 millimeters on a side. Skin is a certain number of voxels, muscle tissue is more. Organs are more yet. More voxels, more information … and perhaps safer astronauts going to the moon in 2020 to stay for a while.

"Radiation is what pays the bills here," said Qualls, who pointed out that knowledge of the body was gleaned from CT scans of cadavers – and of himself.

"I was out sick for a time and had a few CT scans," he said, then laughed. "I was really disappointed because I found out I'm built just like everybody else on the inside."

But what of the cars?

It's part of an ongoing experiment to see if unmanned aerial vehicles can be made to stay aloft longer by refueling each other in flight. The 1/5th scale cars can provide a convenient and safe way to test the technologies he hopes will make that kind of refueling possible.

Oh, and over there is a poster of the Ares Mars airplane. Qualls worked on that, too.

"Working with a team of the very best engineers and planetary scientists on a project that involved every part of NASA Langley was a fantastic reason to get out of bed every day," he said.

Working on data to determine how a child's chest can grow deformed had its own reward. That one included a moving trip to the intensive care unit at Childrens Hospital of the Kings Daughters. And an even greater appreciation for his two healthy daughters, Tori, 15, and Kit, 13.

The array of jobs in the second-floor lab require compartmentalized thinking. Add mentor work with various summer interns, and the concentration becomes even more stressed.

"It's hard for me to pick just one or two things that are most interesting," Qualls said. "I am lucky enough to get to work in a lot of different areas that interest me, including engineering design and analysis, computer programming, data visualization and even some graphic design work. I also get the opportunity to work with students from time to time, and I find that very rewarding, so it's hard to pick just one thing."

Away from NASA Langley, Qualls likes to play volleyball and to travel with his family. But a computer is seldom far from his side. He needs one to keep up with all of the jobs back at Langley.

"New projects always seem to bring the need to pick up new skills," he said. "So it seems like I am always learning and applying something new."

That newness makes it a lot easier to go to work in the morning.