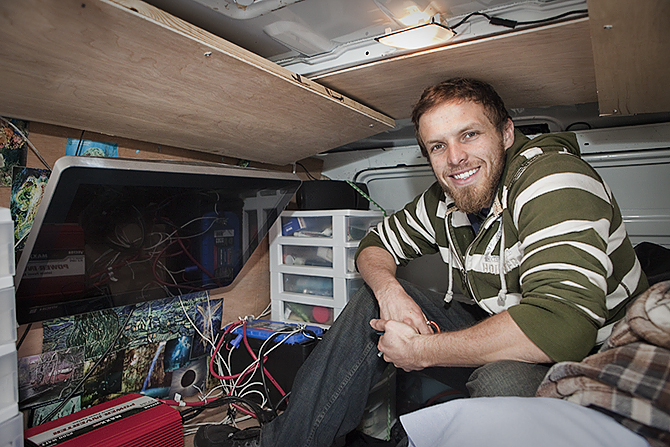 Image above: Van living was fine for Eddie Rowe until the winter cold drove him away. Photo credit: NASA/Sean Smith


"Most of the luxuries and many of the so-called comforts of life are not only not indispensable, but positive hindrances to the elevation of mankind."
--Thoreau
Eddie Rowe was in a bookstore when he ran across "Walden" and remembered studying its author in high school.

"It sort of inspired me," said Rowe, an Internet Technology specialist whose primary job is emergency data recovery as a ROME contractor at NASA Langley. "He talked about living on a lot less and how much we actually use. It hit me. It just clicked."

At the time, he was living with a girlfriend in Yorktown with all of the comforts a townhouse can offer. When they split up and townhouse living was no longer an option, Rowe decided that a Thoreau-like lifestyle might be appealing.

He talked with his parents, and they did some planning. A Mazda sedan was traded for a Dodge cargo van in which they built shelves and a bed and insulated the floor and walls. A solar panel was added to power a battery that, in turn, powered a 13-watt bulb.

Thoreau's necessities in 1845 were a 10-foot-by-15-foot cabin that cost $28.12 to build in the Concord, Mass., woods by Walden Pond. Three chairs and a table, a small desk, a lamp and a pencil and some paper to write about it. And a fireplace for warmth and cooking.

But when you're an IT specialist in 2011, your necessities are a laptop computer, a microwave, a camp stove, a propane heater and a flat screen television.

Thoreau talked about his routine. Rowe's routine included Panera's for sustenance and an Internet hookup for research and blogging. Rowe used the YMCA for hygiene and workouts. A middleweight, he took up boxing.

His Walden Pond was WalMart, which invites campers in the off chance that they might shop. If that also means they come in for a 2 a.m. bathroom break, that's part of doing business.

Rowe drove his "home" to work at Langley.

"I was surprised at the amount of acceptance I got," he said. "I thought I might get a lot of 'what the heck are you doing?' You know, become a social outcast.

"But people are genuinely curious about the van. They ask, 'what do you do for this? What for that?' It's really interesting."

The interest spread outside Langley. The Daily Press did a story on Rowe's new lifestyle. And one day he was pulled over by a police officer because the van's taillights were out.

The registration was in a briefcase under the bed in the back of the van, and the officer used one hand to shine a light there, while keeping the other hand on his weapon.

A fuse was installed, the taillights came on and Rowe went on his way without a ticket.

A propane heater made the van toasty but was turned off at night for safety. Summer and autumn were fine, but awakening in 25-degree weather, with visible breath, collided with the allure of minimalism and halted the Thoreau experiment, at least temporarily.

"This winter kicked my butt," Rowe admitted flatly. "Currently I'm in a renovation mode because it's cold. I honestly wasn't prepared for the winter. About month ago, I realized that I didn't have all of the tools I needed to get through the winter. It was just too chilly.

"I've been insulating and buying a mummy bag, working on heat and trying to secure some gaps to where I can actually move in overnight and stay overnight without freezing my butt off."

While renovating, he's back in the Yorktown townhouse, having made up with Shannon, and now they're talking about her adopting a minimalist lifestyle ­ 2011 minimalist, anyway ­ with some extra accommodations.

And so he is looking ahead.

"My goal is to get a travel trailer," Rowe said. "Get a shower. Get modern conveniences. A queen-sized bed. Air conditioning, heat. A bathroom. That's what she wants, and I can totally understand."

All of that will require a bit more accommodation than a nightly parking place at WalMart, so land will be involved.

And so the analogy with Walden begs the question: Thoreau wanted to get back to the barest, basest way of living. He gave up the frills.

And Rowe is giving up what?

"I guess a mortgage," he said. "Electrical bill. Gas bill. Water bill. Maintenance is very low; auto maintenance, which you do anyway." Thoreau had an answer for that, too: "A man is rich in proportion to the number of things he can afford to let alone." Like bank notes and bills.

+ Return to the Researcher News