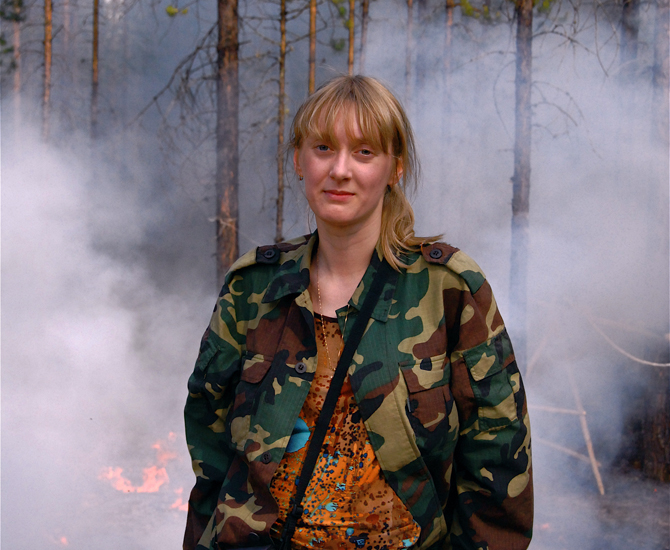 Image above: Elena Kukavskaya at a fire experiment in the Angara region of Krasnoyarsk, Siberia, in 2007. Photo credit: Galina Ivanova.

Elena Aleksandrovna Kukavskaya's love of nature began at an early age, in a very cold and faraway place.

She was raised in Siberia’s third largest city - Krasnoyarsk - and as a child considered herself "an urban resident." So it was nice to escape to the country. "From little up, I love nature and enjoy the beautiful colors of the autumn landscape of the national reserve near Krasnoyarsk," she says.

That love evolved into a passion to learn more about the wildfires that routinely ravish Russia's vast forestland. Today, Kukavskaya is a researcher with the Siberian branch of the Russian Academy of Sciences' V. N. Sukachev Institute of Forest in Krasnoyarsk.

She's also a newly minted Fulbright scholar who just travelled 7,000 miles across 12 time zones to spend the next six months at NASA Langley working through the National Institute of Aerospace in Hampton. 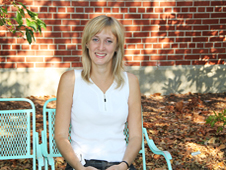 Carbon dioxide and carbon monoxide are greenhouse gases produced naturally by industrial activity and by wildfires. They are major contributors to global warming. Russian wildfires are especially significant because two-thirds of the world’s boreal -- or northern -- forests are in Siberia. Most of the Earth’s terrestrial carbon is stored in them, in both living and dead vegetation.

Wildfires are growing more frequent in Siberia. Global warming already has generated more forest destruction in eastern Siberia and other northern regions. A vivid glimpse of the possible future occurred this summer when out-of-control wildfires and record drought and high temperatures tormented Russians.

In Siberia, Kukavskaya was a member of research teams at experimental fires. The fire areas, typically several acres, were set ablaze for researchers like Kuvaskaya to study. The main goal of such experiments is to estimate and monitor fire effects on carbon cycling, emissions and forest health and sustainability.

It takes a hardy soul to do this kind of work. Because few roads traverse remote Siberia, Kukavskaya has to ride boats, trains and helicopters to do her research. And while taking data at burnt plots after a fire, "there is always a probability that the fires will spread," said Kukavskaya. "There is always the probability some trees will fall on you, and so forth."

"It is a very difficult region to do research," Kukavskaya said. "Foreign scientists are afraid of it. They are afraid to go to Siberia."

Kukavskaya's mentor, Amber Soja, said women seem particularly attracted to this type of adventurous research. "The ones that often work in the toughest places are women," said Soja, a wildfire researcher who supports the Science Directorate through the National Institute of Aerospace. "I’m not sure why women are attracted to this, but we are."

Soja has high praise for her protégé. She and Kuvaskaya met in Siberia and worked together on the FIRE BEAR (Fire Effects in the Boreal Eurasia Region) project. "By the time we finished the experiment, they weren’t going to let her go," she said, "and here we are now with a highly accomplished scientist."

Kukavskaya is an only child. Her father, Alexander, taught at an institute but resigned because he couldn't make enough money after the breakup of the Soviet Union in 1991. He took a job at a power station that generates heat for the city. "He is the chief of the electric department there," Kukavskaya said. Her mother, Tamara, designs, makes and sells clothing by special order from a workshop near her home.

Since arriving in the U.S., Kukavskaya has settled in Poquoson, bought a car and gone swimming - another passion - at the Virginia Beach oceanfront. It was her first contact with the Atlantic, though she has traveled to the U.S. twice for scientific conferences.

Her interests outside work include yoga, swimming, caring for her cat, Emmy, and hanging out with friends. She has been too busy defending her doctoral dissertation to enjoy much free time.

"But if I had the time, I try to use it to improve my English knowledge," she said. "What I really like is going in Russia to French courses. I very like it.”

"I am always exciting on new experiences and like to know the world around us," she said. "Nowadays, I cannot see my life unengaged with studying of fires and their effect on forest ecosystems and environment."


For More Information on: