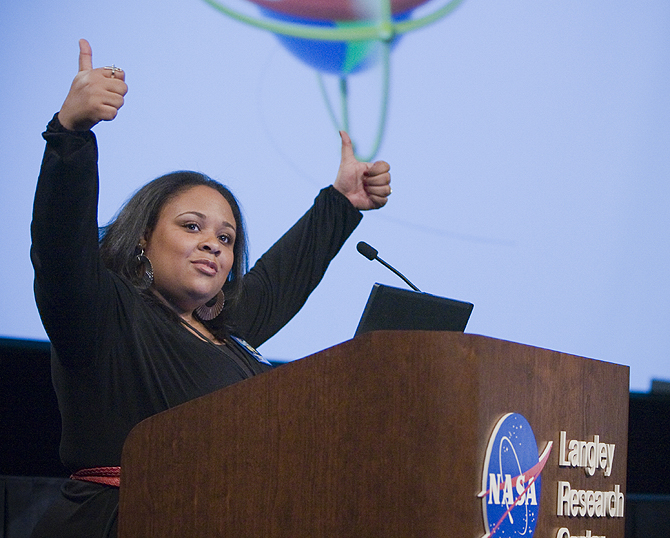 Image above: Erica Alston gives students two thumbs up after speaking to them at NASA Langley's career days in the Reid Conference Center. Credit: NASA/Sean Smith.

Erica Alston used criticism she received as a child to push her toward her career goals as an adult.

“Being told throughout primary and secondary education that I did not have what it took to be successful became my motivation to prove all the naysayers wrong,” she said.

And her grandmother taught her an important lesson in life. “I did not get here alone; I stand upon the shoulders of those who came before me,” Alston said.

She considers her work interesting because of the importance of being a computer engineer doing earth science research at a NASA center.

Alston also enjoys the company. “The people here have become a second family,” she said.

“At NASA Langley, I accomplished my first-year training assignment, which allowed to me to further my direction into atmospheric sciences,” Alston said.

She has extended her family at Georgia Tech, from where she recently returned after continuing her graduate studies. “My experience at Georgia Tech was challenging,” Alston said. “I learned many things that will help me to become a good researcher.”

Alston is a Ph.D. candidate in atmospheric science. “I hope to do practical, meaningful research in air quality,” she said.

She hopes to return to Georgia Tech to defend her dissertation within the next few years. Alston earned her bachelor’s and master’s degrees from Clark Atlanta University.

When Alston is not working or busy with her graduate studies, she enjoys cooking – especially Southern foods. She also enjoys Italian and Mexican cuisine.

And she loves pets. “In my heart I love dogs, but currently that space is occupied by two demanding cats,” Alston said.

Alston enjoys being in Virginia, because “it is so close to home.”

She was born in Louisburg, N.C., and grew up there as an only child. In middle school, she tried out for football and became the first female football player in Franklin County, N.C.

She also enjoyed living in Seattle. “I truly enjoyed the diversity of the people and landscape,” Alston said.