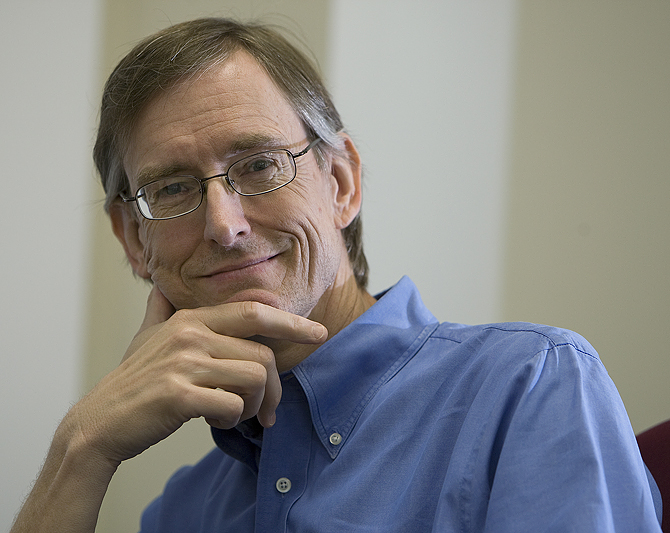 Image above: Dave Young has changed his diet, but not his life, since learning three years ago that he has Celiac Disease. Credit: NASA/Sean Smith

Dave Young had lost 15 pounds three years ago, which with most people wouldn’t be a bad way to welcome turning 50. But when you’re already reed-thin, you aren’t trying to lose weight and you’re tired for no apparent reason, the scales offer a mixture of mystery and concern.

"I’d had blood tests, and nothing had showed up," said Young, deputy head of the Science Directorate at NASA Langley and leader of the Mission Formulation Science team for the CLimate Absolute Radiance and REfractivity Observatory (CLARREO) mission.

"Then a nurse practitioner said, 'I think I know what it is.' "

A blood test confirmed her suspicion and sent Young scurrying to a computer to look up Celiac Disease. He has been at that computer ever since.

"It’s also called gluten intolerance," Young said. "One in 133 people have it. In Europe they test for it at birth. I really think my mother had it, but it was never diagnosed."

People with Celiac Disease cannot tolerate wheat, rye or barley. Their presence in the diet causes a reaction in the small intestine that interferes with the absorption of nutrients.

It’s a genetic affliction that can show up at any time. In Young’s case, it showed up at 50.

"It was triggered by an illness," he said.

He decided to face it philosophically. "I figured I’d had beer for 50 years, and now I couldn’t have beer," he cracked, laughing. "But it was a good 50 years."

More time at a computer showed him a plan of attack. "More and more stores have gluten-free foods," he said. "Farm Fresh does, Food Lion. You learn to read every label."

A drawer in his desk at the Science Directorate has foods to help him through a day: gluten-free granola, energy bars and the like.

"The real difficulty is when I go out to eat," he said.

Young, a Philadelphia native -- ask him about the Phillies and the World Series -- began with NASA 29 years ago, first as a contractor after earning an undergraduate degree in astrophysics at Michigan State and masters in meteorology at Penn State, and then as a civil servant starting in 1996.

That path frequently leads to airplanes, hotels and restaurants, where the menu touts the cuisine, not the ingredients. So before he heads for the airport, he heads back to the computer.

"There are organizations in every city (for Celiac sufferers)," Young said. "There are lists of restaurants."

There is the Outback chain, for example. "I think somebody in that company must have gluten intolerance," Young said. It’s reflected in the menu.

At home, it’s back to the stores that cater to people with his problem. Trader Joe’s is one. "I wish they’d open a Whole Foods here," Young added.

But Celiac Disease has not hindered his career. He is fixated on the past, present and future of the climate, and with having a role in dealing with its change.

"Working in the earth sciences, I have the opportunity to be part of research and satellite missions that have a direct impact on people’s lives," Young said. "The measurement techniques that we are developing today will be used for years to come to help us better understand our world and improve weather, climate and pollution forecasts."

Away from the office, his interests are eclectic and many. He and wife Sally ride bicycles, and he plays volleyball in the center league. Music appeals, as does playing cards and quiet weekends watching movies, particularly now two sons Scott and Glenn have moved on: one getting married next month, the other a junior at James Madison University.

With all of that, there is still time for the kitchen. That time has become even more valuable in the past three years.

With no wheat, rye or barley in his diet, it takes a bit of extra care to provide a staple.

Rice flour, corn flour, all sorts of exotic ingredients are substitutes for those in the sandwich you had for lunch. And the increased number of bakeries specializing in gluten-free products takes some of the pressure off Young and the oven.

It gives him time for yet another mission.

"I want to get the word out (about Celiac Disease)," Young said.

The word is that it’s possible to cope with it, to enjoy a full life.