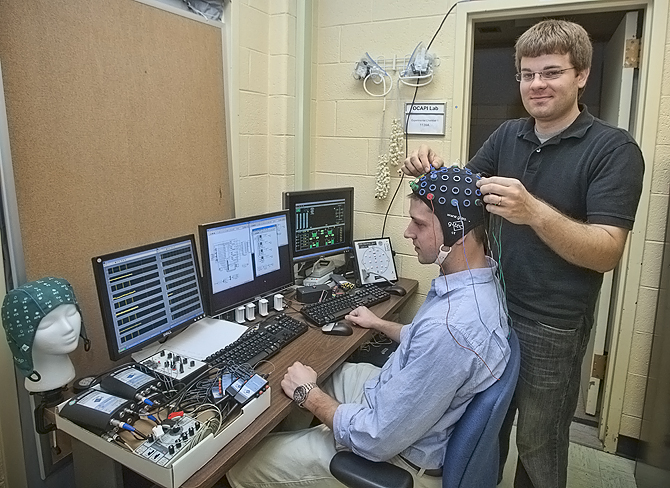 Image above: Chad Stephens fixes sensors to the head of colleague Kyle Ellis to measure brain activity during a test of the Multi-Attribute Test Battery software. Credit: NASA/Sean Smith

He works at a job few outside NASA's Langley Research Center -- or for that matter, inside -- know about. Chad Stephens doesn't create technology that becomes airplanes or spacecraft. There are no Computer Aided Design templates of wings in or engines on a screen in front of him.

His job isn't determining how airplanes will fly, but doing research into how they will be flown, and who will fly them.

It's called psychophysiology, a science based on the premise that the mind and body work in tandem. Its genesis, in the 1960s, involved new ways to measure electrical signals and hormonal activity and marry those tests to mental activity.

Stephens uses that relationship in testing how far a human can go in multi-tasking, employing software called the Multi-Attribute Test Battery (MATB) originally developed by Ray Comstock at NASA Langley and Ruth Arnegard of Old Dominion University to measure a human's reaction to handling four tasks at once, with one of them given on/off automation. The original MAT Battery permitted the first fundamental tests of automation complacency and trust.

The work started at Langley was extended at Old Dominion and Catholic universities to measure the response to turning off automation of two tasks.

Stephens is experimentally manipulating all four -- ­a tracking test, a communications task, a fuel management task and a vigilance task ­-- by varying the degree of automation built into each, rather than using an on/off switch.

"We're trying to break limits," said Stephens, a Danville, Va., native who is leveraging his research into his quest for a doctorate from Virginia Tech. "We're adding a capability to the MATB that actually monitors an individual's brain waves to determine how engaged a person is to the task as a whole, all four tasks at the same time."

When engagement in a task wanes, so does that task's automation, and that requires the brain to reengage more completely to handle increased manual control. Stephens plans to build in an anomaly ­ an emergency in fuel management ­ which will add pressure to the multi-tasking process.

"Some people who are excellent at multitasking may be thrown off by an emergency situation in just one task," he said.

Maybe not. "Almost all of us drive, and that's quite a complex test," Stephens reminded.

It's the sort of research that he intended in working toward his doctorate at Tech, but ­ while academe is the fount of much research ­ "a lot more advances have been made with me here than when I was in school," Stephens said. "At school, I was doing all the work. Here it coincided with the software development of the MATB II."

He came to NASA Langley in 2008 after earning a degree in psychology at Virginia Commonwealth and a masters at Virginia Tech. A Langley Aerospace Research Summer Scholars (LARSS) student for a summer, he became a civil servant a year and a half later. The job allows him to do his doctoral research while making a living.

During his LARSS internship Stephens started working with Alan Pope, who has done pioneering work in the field, and the two have worked in the field of human behavior using video games to measure reaction.

The question comes often, and the answer has become an easy one.

"We spend most of the time debating and trying to determine the scientific basis for what it is that we're looking at and, oh, by the way, we're using video games," Stephens recited in an oft-used response to an oft-asked question. "(The games are) just a stimulus."

The Virginia Tech doctorate is scheduled to be complete in the fall, but the research will never end. Nor, perhaps, will the association with education. He is seeking an adjunct professor's post with a local university, in part, Stephens said, because "obviously I want this (NASA work) to be my career, but the university is the heart of science, and if I'm not engaged in that, I can see where I might become disenchanted or closed off. I need to make sure I'm staying in touch with academia."

It's a way to stay in touch with two worlds, allowing each to feed the other.

"Somebody asked what did a job at NASA and, hopefully, a career mean to me?" Stephens said. "I said it was a validation that all of the education and all of the work and all of the papers I had written and all the tests I had taken were worthwhile, and my interest in science had paid off for me. That I could actually choose to do something that I thought was interesting to me -- which is psychology and more specifically psychophysiology and understanding the working of the mind through physiology. I could find and be offered a really cool job doing that was really encouraging to me. And it keeps me interested."

And allows him to be a part of shaping the future of aviation and space travel.