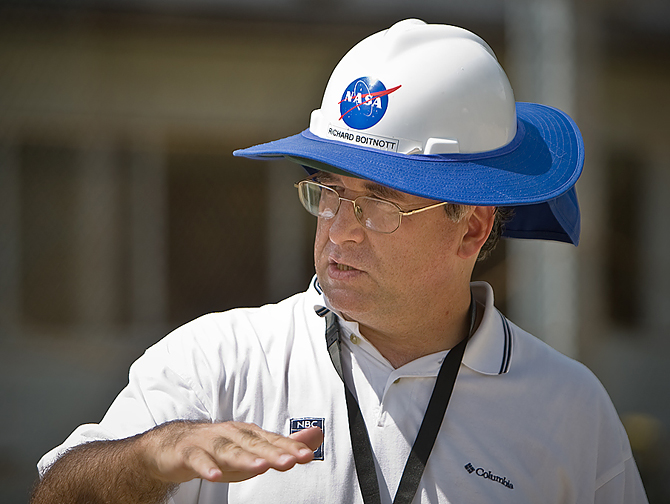 Richard Boitnott has the kind of job that every kid would love to have.

"I get to crash things and see what happens," he said.

When it comes to what Boitnott does at NASA Langley, that is putting it simply.

Since 2006, he has overseen the testing of all of the Orion landing systems as the lead test engineer. Boitnott also serves as the Impact Dynamics Research Facility safety head. For 25 years before that, he worked as an Army civil servant engineer, focusing on aeronautics at NASA. He has overseen full-scale crash tests of Army helicopters – including a Blackhawk -- general aviation aircraft and even a NASCAR race car.

Though he spent a little time in the structural mechanics branch in Building 1148, he has called the Gantry home for the majority of his career.

He has been spending his summer on the Gantry grounds, sweating in support of Orion. He has conducted tests that have looked at a system of struts for the Orion crew module, possible use of airbags for a ground landing and, in the distant future, he will oversee a crucial test that involves swinging a flight-like Orion into a rectangular pool to test water landings.

Of his job, he said, "It's a blessing. Every day is different here, every test. We have different approaches, different procedures, and it's just fun to conduct the tests and fun to watch. It's great being a part of the next space exploration."

The best part, he says, is when a test is complete and "you really understand the laws of physics."

When asked to recall a memorable accomplishment, one event stood out for Boitnott.

"The Blackhawk test," he said.

It was the first time a UA60 Blackhawk had been crash-tested. The Army was interested in qualifying its external fuel tanks.

When the Blackhawk arrived at the Gantry, it came in seven boxes, Boitnott recalled. He and his team had to put the helicopter back together and outfit it for the test in less than two months.

"No one thought we could do it," he said.

But two months later, the test went off without a hitch – well, almost.

"The only hang-up we had was that a bus bringing in people to watch the test got lost on its way to the Gantry, so we were held up for 10 minutes," he said.

To sum up a good day on the job, Boitnott refers to a quote from Hannibal, a character from the popular '80s television sitcom The A-Team: "I love it when a plan comes together."

A Virginia Tech alumnus, Boitnott was born in Roanoke. He loves the mountains, wildlife and seasonal weather. In his spare time, he takes photographs.

Boitnott mainly likes to photograph wildlife, such as birds that live around his Poquoson home, and he enjoys taking pictures of his family – when the members cooperate. He even sports a hard hat with a built-in camera on top.

Asked if he wears it to work, he laughs and says "no," though he admitted that he did bring it to work once to show his coworkers.

Out of work, he stays busy.

Since 1986, Boitnott has been a coach and volunteer with Odyssey of the Mind, an international educational program that provides creative problem-solving opportunities for students from kindergarten through college. At times he would spend up to 20 hours a week working with the students. Both his children attended Poquoson schools and participated in the program. He has helped ferry Poquoson teams to the world championships on a number of occasions.

"There is a lot of time involved, but it's great watching the kids compete," he said.

His experience off site has had an impact on his career here at NASA.