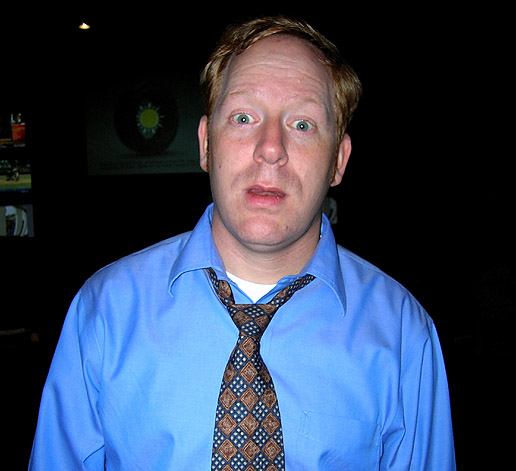 Image above:Blair Allen is worn out from a night of traveling with NASA EDGE. Credit: Kathy Guild

Blair Allen, NASA Edge’s humorous co-host will be the emcee for ‘Langley’s Got Talent’ competition for the 90th anniversary open house on Oct. 27.

“I don’t know what NASA’s been doing for the last 89 years, but I am this year’s Emcee. I usually don’t associate with celebrations centered around the number 90, but for NASA I’ll do just about anything.”

Allen explains his hopes for the talent competition. “Well, my hopes and goals are very simple. I hope and pray that there isn’t anyone out there more talented than I am. Call it job security or whatever you like. I’m actually terrified. And if Thomas (the brutally intimidating Security Officer at the back gate) auditions for NASA EDGE Co-Host Tossing, I am out of here.”

You might expect the emcee of this event to want several participants to show-off their talents, but Allen takes a different approach since he views the participants as a potential threat. “They shouldn’t participate. Every person that enters this competition is one step closer to exposing my limited talent. I say, go enter the NASA Johnson Space Center Talent Competition or the NASA Headquarters Talent Competition.”

Come out and audition for the 'Langley’s Got Talent' competition and give Allen a run for his money.

On Center and to the viewers of NASA EDGE, Blair Allen is typically known as the “goofy co-host” for his ability to find a humorous side or response to almost any situation. Apart from being the co-host, he is also the senior producer of the successful NASA EDGE show. Allen is employed by Crewestone Technologies.

“No one has ever effectively described what a producer does. Let’s just say, I use my cell phone like a Jedi Knight, and try to make the life of the NASA EDGE Host easier.“

Allen explains he landed his current position on Center with NASA Edge by being a very agreeable person. “Someone asked if something could be done, and I said ‘yes.’ I have spent most of my professional career doing just that. I do have a Master’s in Film, but that only means that I said ‘yes’ while wearing an artsy beret.”

Allen appreciates his “sincerity and ability to think deeply and seriously about all of life’s issues. I rarely do this, but I can… when necessary.”

Come showcase your talent and maybe you can even catch a serious glimpse of ‘Langley’s Got Talent’s’ emcee, Blair Allan. Not likely, but it could happen.

Denise Adams
The Researcher News
› Back To Top