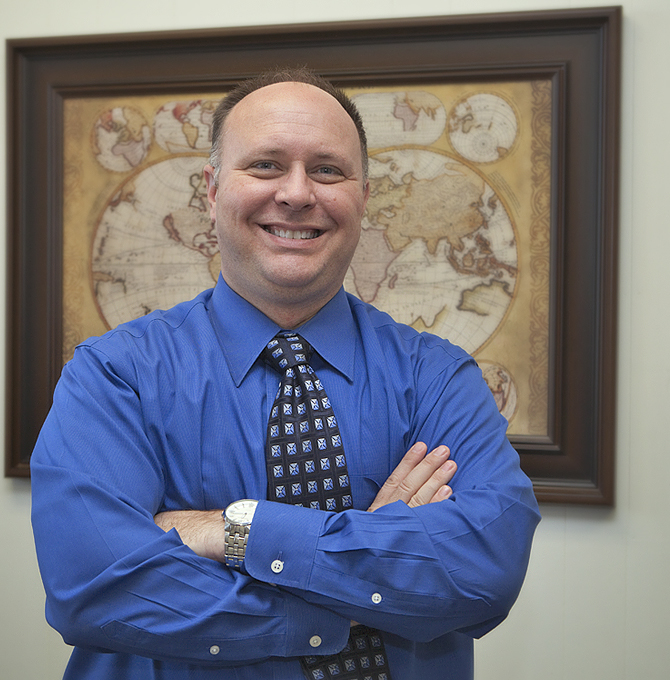 Image above: Steve Gaddis, who was minister of a church he built in Alabama, runs the newly created Game Changing Technology Development office at NASA Langley. Credit: NASA/Sean Smith

The call came twice, the first time when he was a kid at his grandparents' home in Tennesee and the Apollo launches were on television.

Then, when he was a NASA engineer, working on the space shuttle at Marshall Space Flight Center and looking for a place to hold a Bible study. From that study group sprang the New Life Tabernacle in Arab, Ala.

He has spent the past five years going through a series of adjustments, from minister to layman, from deputy chief of the Launch Abort System to working with the Office of the Chief Technologist at NASA headquarters, from working at an operations center to running an office at a research center.

Gaddis, a serious college football fan as a graduate of the universities of Tennessee and Alabama, calls it his "second half" and adds that it's part of an ongoing education.

Take moving from Marshall to Langley, from human space flight operations to research linked to space flights of the future.

"It's a big adjustment," Gaddis said. "My wife asked me one night, 'how are you liking it?' I said, 'It's a slower pace, not because these guys don't work hard, but because they're just trying to get things right.' Sometimes at an operations center, you have to say, 'well, is it good enough?

" 'Is it the best? No. Is it good enough to get the job done? Yeah.' As an engineer, you want to put the best out there."

Rather than figuring out a way to stop blades from melting on a shuttle engine turbine, he's leading efforts in composites that will lighten the load the next rocket has to carry into space. Efforts in radiation shielding. Efforts in slowing a spacecraft down as it nears where it is to land.

And he's catching the research fever. Passion for a job has never been a problem.

"I'm working with more scientists now than engineers," Gaddis said. "Scientists are a different breed. They are as passionate about their research as anybody I've ever worked with in human space flight. They believe the research they are doing is going to propel this country forward -- economically, technically and scientifically. They're going to keep this country a leader in technology and innovation, and they believe it could be the technology they're working on that does it. And they are right. This is the right place to invest."

Gaddis grew up in Georgia, then moved to Tennessee, where space grabbed him so hard that, as a tot, he carried toy rockets in his pockets for play.

At the University of Tennessee, he went to a co-op exhibition, where he learned that NASA was looking for students. "I signed up, got selected and, my friend, the rest is history," Gaddis said. "I never looked for another job."

He worked with the space shuttle, then nuclear propulsion and finally launch abort, putting in long hours that got even longer when he was grabbed by a second vocation.

Or, more appropriate, a second call.

"We dug a church right out of the ground," Gaddis said. "Once I was approved (as an ordained minister), we started door-knocking. I would use advertisements. We raised money and built a church to 250-300 members. We started a day care, a Christian K-12 school."

And continued to work with NASA.

"It was tough," Gaddis said. "It was quickly wearing me out. Then we went to teamwork. When you can't do it all yourself, you start to understand that many hands make lighter work."

A team ministry sprang up.

"That's how I kept from having a heart attack from doing too much," Gaddis admitted.

He found a young couple to take over the New Life Tabernacle and retired. Or as much as any minister can retire.

"It never completely stops," Gaddis said. "You still get calls all the time, but all of that slows down."

There's time now for fishing with sons Stephen and Logan, as well as their various sports activities. An older daughter, Mindi, is married and another, Hannah, is a student at Old Dominion University.

He and wife Marquita want to return to foster parenting, as they did in Alabama.

"Anybody ought to help a kid," Gaddis said.

The search is on for a church, and when you've been a minister, that search is a serious one. Like research, like working on the space shuttle, like everything else he has done in his life, it's a search with passion and energy.

It's the only way Gaddis knows how to approach anything.